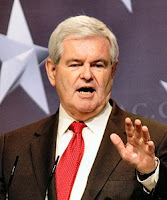 A column in Politico looks at Newt Gingrich's scary campaign for the GOP nomination and also recalls that Gingrich was a chief architect for Washington gridlock so derided by voters of all stripes. Do Republicans have amnesia or are they simply total morons? I won't give my answer to that questions, but I suspect readers will know where my vote lies since I have said repeatedly that to be a member of today's GOP a lobotomy or mental illness are a prerequisite. One can only hope that this seeming embrace of a thrice married serial adulterer who has enriched himself playing the Washington influence peddling game by the "family values" crowd will ultimately bring the both the GOP and Gingrich crashing to earth. Here are some highlights:

I did not think I lived a good enough life to see Newt Gingrich as the Republican nominee,” Rep. Barney Frank (D-Mass.) said last week when he announced his retirement. That more or less sums up the view of most Democrats. Gingrich has more baggage than United Airlines. Are Republicans really crazy enough to nominate this presumably washed-up, ethically compromised, divisive, reckless and undisciplined figure for president? Apparently they are.

The White House must be gleeful. Democratic campaign committees have been running attack ads against former Massachusetts Gov. Mitt Romney. “They want to throw the primary process to anybody but me,” Romney told supporters at a Miami rally.

Polls over the past month show President Barack Obama and Romney in a dead heat, while Obama beats Gingrich every time. The prospect of Gingrich becoming president is staggering. What’s behind the Gingrich surge? For one thing, Gingrich is smart.

For older Republicans, Gingrich is a familiar figure. In fact, he’s a brand. They’ve bought his books, seen his tapes, heard his lectures. They know his foibles — his three marriages, his ethics charges, his history of influence peddling — and they’ve gotten past them. They remember Gingrich as the leader who brought them to the promised land – a majority in the House – after 40 years in the wilderness.

But what’s with tea party supporters? . . . . Tea party activists are supposed to hate Washington and career politicians and political insiders. Gingrich spent 20 years in the House, four as speaker. Since leaving Congress, he has profited handsomely on his Washington connections. You can’t get much more inside Washington than that. What tea party supporters see in Gingrich is self-confidence. He speaks in certainties.

He has no doubt about anything he believes, even if it’s very different from what he believed a few years ago. As for people he disagrees with, they’re not just wrong. They’re “stupid,” and “grotesque” and “disgusting.”

Most people see that as arrogance. But the tea party sees it as heroic defiance. Gingrich believes that, as president, he could subdue Congress and even the federal courts. He claims he would have the right to fire judges he disagrees with and limit the jurisdiction of the Supreme Court. “We could begin to break up the gridlock very rapidly if I were president,” Gingrich pronounced at a rally last week.

The truth is, Gingrich is the man who created gridlock. . . . . Gingrich demanded that Republicans stop behaving like a docile minority and instead, denounce the long-ruling Democrats as corrupt and obstruct everything they were trying to do. Even to the point of shutting down the federal government. Twice. Gingrich is the ultimate oxymoron: the anti-Washington insider.

The tea party is buying it. Because they, too, are certain about everything they believe. Notice what’s happened since the tea party gained control of the GOP in 2010. Gridlock has gotten worse. Tea party activists do not believe in compromise, which is the only way Washington works. They regard compromise as selling out. The tea party feasts on gridlock. That’s why Gingrich is their hero.

Gingrich’s problem is that the voters don’t like him. In 35 polls taken over the past 17 years, Americans expressed a negative impression of Gingrich 32 times. . . . . It looks like the Republican race is coming down to a choice between two problematical contenders. Romney is Mr. 1 Percent. Gingrich is Mr. Gridlock.

Posted by Michael-in-Norfolk at Tuesday, December 06, 2011

Can't morons have amnesia, or at least memory deficits, too? It seems that there are many who don't remember Gingrich, whose name should be infamous in the manner that McCarthy is.