Is Homophobia Associated with Homosexual Arousal? 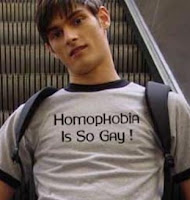 I've written before about this question before and based on my personal interactions with some of the professional Christian set and subsequently "outed" members of the GOP, I'd answer a definite yes. And this conclusion was confirmed by a study more than 15 years ago at the University of Georgia. Here's the synopsis of the study from the U.S. National Library of Medicine:

The authors investigated the role of homosexual arousal in exclusively heterosexual men who admitted negative affect toward homosexual individuals. Participants consisted of a group of homophobic men (n = 35) and a group of nonhomophobic men (n = 29); they were assigned to groups on the basis of their scores on the Index of Homophobia (W. W. Hudson & W. A. Ricketts, 1980). The men were exposed to sexually explicit erotic stimuli consisting of heterosexual, male homosexual, and lesbian videotapes, and changes in penile circumference were monitored. They also completed an Aggression Questionnaire (A. H. Buss & M. Perry, 1992). Both groups exhibited increases in penile circumference to the heterosexual and female homosexual videos. Only the homophobic men showed an increase in penile erection to male homosexual stimuli. The groups did not differ in aggression. Homophobia is apparently associated with homosexual arousal that the homophobic individual is either unaware of or denies.

The study is most relevant in the wake of the Christianist hysteria over Barack Obama's and Hillary Clinton's steps to ratchet up pressure on anti-gay nations and Rick Perry's latest ad that glorifies anti-gay political positions (is a coincidence that gay rumors have swirled around Perry for years?). PoliticusUSA has some fun commentary on the closet cases within the GOP and the Christian Right. Here are some highlights:

Darn penises (or peni as The Donald would no doubt say). The Republican Party flees in terror.

I haven’t seen additional studies on this, and one would want to see these results duplicated, but this study does differentiate from arousal that can result from anger and specifies the arousal measured as sexual. I think we can all agree that the penis doesn’t lie as often as a politician or demagogue con artist raking in millions by appealing to hate.

This theory has been out there since Freud posited it. It is predictable that the Republican Party suffers reliable and consistent public humiliation after their most ardent anti-homosexual puppets get busted in public bathrooms doing the dirty deed.

Many theories in psychology account for this other than the homoerotic enlarged penile circumference. There’s projection that allows the person to distance themselves from what they most fear and despise in themselves. There’s denial leading to all kinds of machinations meant to assist in avoiding facing the truth.

And then there’s just common sense. How much energy does it take to hate an entire segment of people, to work tirelessly in order to deny them the right to serve in the military, to marry, to get access to healthcare and the pension of their spouse, even the right to visit their partner in the hospital?

Most people simply don’t care what strangers do with their life. It’s beyond telling when a political party and so called religion come together in service of this kind of hate. Fear often drives the individual; fear of their own desires and fear of their own choices. But the agenda of the political religious group is much more suspect. What do they stand to gain from focusing on something quite irrelevant to most of our daily lives? And more importantly, what are the results of their efforts?

The groups who perpetrate such ugly hate on a national, macro level are not much different from the childhood bully; they’re afraid, they’re attempting to put themselves in a position of power and authority over another group for their own benefit, and they are attempting to pull their group together by singling out those who don’t belong – a tactic often used by weakened groups whose only hope at survival is to divide and conquer.

I've often said that Robert Knight, Tony Perkins - and likely Brian Brown as well - who are just too hysterical about homosexuality need to go out and hire rent boys, satisfy their suppressed desires and move on in their lives and let the rest of us live our lives as we choose. Ditto for all the tortured "ex-gays" for pay.
Posted by Michael-in-Norfolk at Thursday, December 08, 2011