NOM Is Now Disseminating the "Gays Can Change" Myth 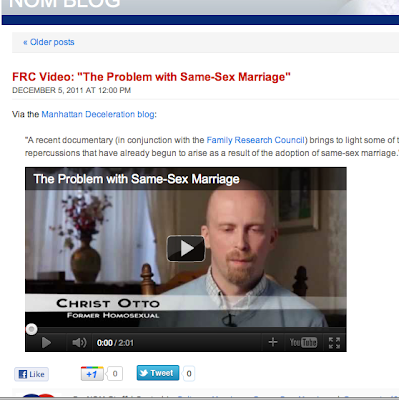 For an organization that purportedly was organized for the sole purpose of "protecting traditional marriage," the National Organization for Marriage ("NOM") is quickly morphing into a full fledged arm of registered hate groups such as Family Research Council. I've always assumed that NOM is receiving financing from such groups - and in all likelihood the Catholic Church and Knights of Columbus.

I hate to sound cruel, but Chris Otto, portrayed in FRC's hate piece being disseminated by NOM (the screen shot above is via Good As You) strikes me as yet another religiously tortured and brain washed "ex-gay" for pay. Literally every LEGITIMATE medical and mental health association denies the "change myth" set out in the video, yet the "good Christians" at NOM and FRC don't hesitate to perpetuate the lie.

Equally scare, of course, are some of the supportive comments on NOM's blog where the video is posted. The willing embrace of ignorance and bigotry is disturbing. But sadly, that's the face of Christianity too much of the time in this day and age.
Posted by Michael-in-Norfolk at Tuesday, December 06, 2011