The Christian Right's Exporting of Homophobia to Africa 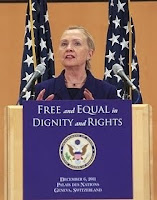 The mouthpieces of the American Christian Right - who are neither truly Christian nor right - and their pandering whores in the Republican Party continue to go berserk in the wake of Hillary Clinton's historic speech addressing the officially endorsed anti-gay hatred and violence in many countries of the world. The usual suspects are beside themselves and the spittle is flying by the bucket full. Think Progress has this summary of some of the hate infused reactions:

Rick Perry: “This is just the most recent example of an administration at war with people of faith in this country. Investing tax dollars promoting a lifestyle many Americas of faith find so deeply objectionable is wrong. President Obama has again mistaken America’s tolerance for different lifestyles with an endorsement of those lifestyles.”

Rick Santorum: “Obviously the administration is promoting their particular agenda in this country, and now they feel its their obligation to promote those values not just in the military, not just in our society, but now around the world with taxpayer dollars.”

Matt Barber (Liberty Counsel): “[President Obama] feels compelled to export American culture’s decline in morality, and export that immorality to other nations that are trying to adhere to traditional principles relative to human sexuality.”

Pat Robertson (The 700 Club): “Isn’t it appalling that the United States of America would try to force the acceptance of homosexuality on other nations but at the same time we would not force them to take care of their religious minorities and they would permit discrimination and persecution of Christians?”

Vic Eliason (Voice of Christian Youth America): “The inmates have taken over the asylum.”

Janet Mefferd (radio personality): “Other than the fact that you have African countries that have policies like Nigeria, criminalizing homosexuality, are they not a sovereign nation? Can’t they make up their own minds about these things? If they want to pass a law we’re going to play bully over this issue?”

Peter Sprigg (FRC):These type of human rights and civil rights protections are usually granted for characteristics that are inborn, involuntary — you can’t choose them, immutable — you can’t change them, and innocuous — they do no harm to anyone. All of those things are true of race and sex. None of them is true of the choice to engage in homosexual conduct.

What is noteworthy about all these reactions is that they utterly reject modern medical/mental health knowledge on sexual orientation in favor of a few passages from a book - the Bible - increasingly being shown to be untrue on many issues and anything but accurate history. The other noteworthy thing is that these self-congratulatory "Christians" have a single message: hatred towards others who are different.

It would be bad enough if these cancer like hate was limited to the USA. Unfortunately, the purveyors of anti-LGBT hate have engaged in a successful plan of exporting this sickness to Africa where they have played upon uneducated populations and acted in consort with some of the nastiest rulers on the planet. Op Ed News has a piece that looks at this horrific American Christianist export. Here are some highlights:

We can see the flames from Africa now, and they are not coming from bonfires declaring liberty for LGBTQ people. They are the flames coming from countries like Uganda and Nigeria. They are the flames of anger and vengeance being wreaked upon gay communities. Where the fires came from, however, is something that should concern everyone in America, because, like some perverted Prometheus, America's Christian Right gave Africa it's fires. Clinton was right to say being gay was not a Western invention, however, she should also have said that homophobia was certainly a Western invention, promoted in Africa by Christian Right leaders such as Scott Lively, Lou Engle and, to a certain extent, Rick Warren.

The Christian Right's exportation of homophobia has been happening over a number of years, well ahead of the "Kill-the-gays" bill in Uganda.

Nigeria has reacted so strongly to Clinton's speech that it purportedly added MORE offenses in its anti-gay bill. "To hell with them," said lawmaker Jakari Mohammed , referring to other denouncing the bill. It could be argued that Nigeria has seen same-sex "marriages" for centuries (actually as part of a surrogate tradition, with a woman marrying another woman for her husband), but somehow traditions have a way of disappearing and appearing when according to expediency.

According to the current bill, kissing in public would be an offense punishable by up to 10 years in prison. Anti-gay vendettas - like those in Uganda - will become rife in the most corrupt country in the world.

Of course, what's remarkable about the list is that it does not include South Africa, the only more or less functioning nation on the continent, where gay rights are protected in the constitution and same sex marriage is legal. It says a great deal about the nations that are climbing on the homophobia band wagon. If their leaders truly gave a damn about their respective nations, an anti-gay jihad would be the last thing upon which they'd be focusing their attention. There are far, far greater problems to deal with. Let's be blunt. Just as the one of my posts yesterday correlated Biblical literalism with ignorance and low IQ's, homophobia in Africa correlates with the failed nations on the continent. In fact, an argument can be made that most of these nations were better governed when they were governed by European colonial powers.
Posted by Michael-in-Norfolk at Friday, December 09, 2011