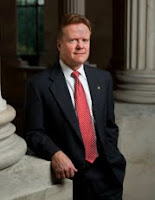 My post the other day on this blog and later on The Bilerico Project resulted in several interesting e-mails and comments. It's unfortunate that some of the information I received did not get wider press coverage during Webb's campaign against George Allen. It seems in many ways that Webb and Allen are both cut out of the same cloth. Indeed, but for Allen's "Macaca moment" and other distractions, voters might have released that Allen was not the only racist running for office. One e-mail cited Webb's comments at a Confederate Memorial. Another provided a link to a book entitled Neo-Confederacy: A Critical Introduction. A third referred me to a 2008 Politico article. The picture revealed of Webb is not exactly positive- especially if one believes in equal rights for all citizens, not just whites and heterosexuals. It seems that Webb can properly be described as a Neo-Confederate with all the negative connotations that attach. As a result, it is not a surprise that the Virginia NAACP has demanded a meeting with Webb in the wake of his anti-affirmative action op-ed in the Wall Street Journal. First, there are these highlights from Politico:
*
Edward H. Sebesta, co-author of the forthcoming “Neo-Confederacy: A Critical Introduction” (University of Texas Press), said Webb’s views express an unhealthy regard for a political system that propped up and defended slavery. His book, in fact, will cite Webb as an example of the mainstreaming of neo-Confederacy ideas into politics, said Sebesta, a widely cited independent historical researcher and author of the Anti-Neo-Confederate blog. “I don’t think people have thought through the implications of how his ideas have racial overtones, even if they are inadvertent,” Sebesta said.
*
In a different context, Webb’s record might very well have made a bigger splash. But it was largely overshadowed by other developments. At the time, it was widely perceived that Webb had more damaging exposure from his 1979 Washingtonian magazine article titled “Women Can’t Fight,” in which Webb, an ex-Marine, described one of the Naval Academy’s coed dorms as “a horny woman’s dream” and argued against allowing women to take combat roles.
*
Webb generally remained silent during Allen’s Confederacy controversy, focusing instead on the Republican’s support for the Iraq war and other issues. Three months later, Allen’s caught-on-video reference to a Webb campaign volunteer as “macaca” took center stage and set in place a campaign narrative that dominated media coverage until his narrow defeat. Webb won overwhelming support from black voters — 85 percent — who accounted for 16 percent of all voters, according to exit polls.
*
Obviously, had blacks known more about Webb's true beliefs and his near worship of the Confederacy, they might well have stayed home and Webb might not have been elected. Now, here are some highlights from the introduction to the above referenced book by Sebesta that explain Neo-Confederate beliefs:
*
The New Dixie Manifesto was a clarion call to arms in which Hill and Fleming described themselves as representing "a new group of Southerners . . . calling for nothing more revolutionary than home rule for the states established by the U.S. Constitution." Comparing "American Southerners" to, amongst others, Scots and Ukrainians, the manifesto charged that the United States had treated "American Southerners" with "exploitation and contempt," and that a "renewed South" was both necessary and achievable. Among its specific points, the manifesto espoused the following: (i) home rule for "Southerners", (ii) states' rights and devolved political power, (iii) local control over schooling, in opposition to federal desegregation decrees, (iv) removal of federal funding and initiatives from Southern states, (v) a Christian tradition in opposition to modernity, and (vi) support for Confederate symbols.
*
National Public Radio's Weekend Edition broadcast an interview with Southern League president and manifesto co-author Michael Hill. In response to Diane Roberts's questions about democracy, Hill said: You know, the South has never bought into the Jacobin notion of equality. The South has always preferred a natural hierarchy. You're always going to have some violations of people's rights, for whatever reason, but we just believe that a natural social order left to evolve organically on its own would be better for everyone.
*
Hill's position, as we review in Chapter 4, is consistent with not only neo-Confederacy, but a nineteenth-century notion of social Darwinism. Explaining the neo-Confederate movement in London's Guardian newspaper, Roberts later wrote: The Southern League [is] a burgeoning organisation of mostly middle-class, often academic, certainly angry, white men. . . . Their mission is to alert like-minded "neo-Confederates" to "heritage violations." . . . The Southern League's agenda is, as their board members describe it, "paleo-conservative." They want the South to return to the "order" it once had before the "disruption" of the Civil Rights Movement.
*
Richard Shumate, writing in Southern Voice in 1994, warned that "some of the people who are leading the charge to preserve Confederate heritage, known collectively as the neo-Confederate movement, are often openly, and passionately, homophobic." Citing the overlapping interests of the Sons of Confederate Veterans (SCV), Georgia's state representatives, and outspoken conservative leaders such as Pat Robertson and Pat Buchanan, Shumate explained that "while neo-Confederates leaders labor long and hard to veil any racist sentiments among their members (though in many cases, the veil wears pretty thin), disdain for gays and lesbians is, in contrast, often expressed openly and boldly."
*
Our research was first published in 2000, when Sebesta's essay in Scottish Affairs argued:

Neo-Confederacy is a reactionary movement with an ideology against modernity conceiving its ideas and politics within a historical framework of the U.S. Civil War (1861-1865) and the history of the American South. This includes more than a states' rights ideology in opposition to civil rights for African-Americans, other ethnic minorities, women and gays, though it certainly includes all these things. Opposition to civil rights is just a part of a world view desiring a hierarchical society, opposed to egalitarianism and modern democracy. Later that year the Southern Poverty Law Center (SPLC), an organization well known for its monitoring of, and legal contests with, militia, patriot, and other racial supremacy groups, identified the League of the South as a "hate group."
*
In this volume, contributors draw on documents published by neo-Confederate activists to explore how neo-Confederate ideology constructs a worldview that we contend is patriarchal, ethnocentric, intolerant, and racist, but a worldview that operates utilizing a complex discourse, a language that at face value appears to laud cultural rights and freedoms, heritage preservation and celebration, local control over institutions, and Christianity.
*
In light of Webb's homophobia which he has boldly evidenced by his failure to support DADT repeal and now his announced aversion to affirmative action programs, many are beginning to question exactly who we have representing Virginia in the U. S. Senate. As noted, the Virginia NAACP is up in arms and rightfully so. Here are highlights from Richmond's Channel 12:
*
The Executive Director of the Virginia State Conference of the NAACP explained today his rationale for lashing out at Senator Jim Webb. King Salim Khalfani wrote a letter to Webb expressing his anger over an op-ed the Senator wrote for the Wall Street Journal on diversity programs like Affirmative Action.
*
Khalfani chose not to back down from the inflammatory language. In fact he embraced it. “If they think this doesn’t affect people, well it affects our everyday lives,” said Khalfani. “Yeah, I’m angry.” And he doesn’t plan to back down. “We don’t hope to meet with him,” he said. “We demand it. He works for us, we don’t work for him We elected him.”
*
In a year when Democrats need all elements of the Party's base motivated, Webb has deliberately alienated the LGBT vote and now he's basically flipped the bird to blacks. Is he deliberately trying to see Democrats defeated this November? It's a question Democratic Party officials - and Jello-spined Barack Obama - need be forcefully asking Webb. I have my own Confederate ancestors tracing back to New Orleans. That, however, doesn't cause me to secretly long for the return of segregation and white supremacy in the manner that seems to be attractive to Mr. Webb.
Posted by Michael-in-Norfolk at Wednesday, July 28, 2010