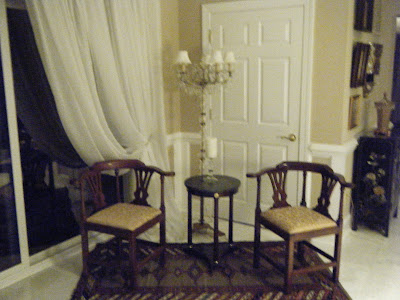 UPDATED: With the help of our friend Rob and the boyfriend - who being "Martha Stewart" at all times - came up with a great place for the corner chairs and the boyfriend just happened to have spare fabric to cover them. The finished work on the chairs next to the boyfriend's century plus old Austrian chandelier is shown above in the great room. The chairs proviide another discrete conversation area and tie in with the traditional/asian theme of the room which measures 25 by 30 feet.
*
*The boyfriend and I are back from a trip up to Charlottesville to help move my mother out of her own place and into an apartment in one of my sisters' home less than 15 minutes from where my mother has lived for the last six years since leaving Virginia Beach before my father died. She seems happy with her new place which has just been remodeled and which affords her ground level access. A lift is being installed so that she can access the main floor of my sister's home as well. It is so, so hard to see one's parents age and begin to fail (the photos is my mother 60 years ago). The trip was uneventful and everything was accomplished that we needed to get done and I will feel far better not having my mother living alone.
*
Nonetheless, I find myself with an overbearing feeling of sadness. I'm not sure exactly why. Perhaps it's from memories stirred both by pieces of furniture, photos and other items each of us siblings took since the new apartment is far smaller than her former three bedroom two bath home. Items that we brought back to Hampton include the heavy iron bed frame from my parents' former bedroom in Virginia Beach, another Chippendale corner chair that my dad made from an expensive historic reproduction kit years ago (he made a total of seven: one for each of his children and one for himself and my mother), assorted photos, and a rugged solid Honduras mahogany shipping chest that my grand parents used to ship dishes from Panama over 70 years ago. Figuring how to integrate things into the house will be a challenge since the boyfriend had it beautifully furnished before I moved in some of my meager possessions. Other items - a TV, lamps, artwork - will be transported to the house I own in Norfolk and rent out to tenants.
*
Another item I brought back is my 7th grade wood shop project that my mother had kept all these years - a cherry salad bowl that I made on a wood lathe. Ironically, 7th grade was the year that I seriously began to realize that I was "different" and had attractions to other boys. Much has happened over the intervening decades - high school, college, law school, marriage, three beautiful children, finallt "coming out", being fired for being gay, a horrific divorce and bankruptcy, a tumoultuous relationship with my ex-boyfriend and now two years with the boyfriend (Friday was our anniversary). At times I truly don't know what the point of it all has been. Other than my wonderful children, have I made any difference in the world? I really don't know.
Posted by Michael-in-Norfolk at Sunday, July 25, 2010

You are making a huge difference, even saving lives! And how sweet that your mother saved that cherry salad bowl! You've made a difference to her!!