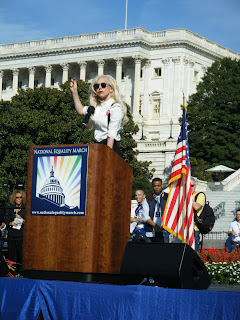 I may be revealing my age or my lack of constant music listen, but other than hearing conversations and seeing news articles about Lady Gaga, I wasn't up to speed as to who she is and her outspoken support for the LGBT community. That changed dramatically at the National Equality March last October when I heard Lady Gaga speak (she's pictured at left about 20 feet from where the boyfriend and I were standing in the press area). Her "President Obama, are you listen?" will echo for a long time to come - especially since Obama clearly is NOT listening. Now, Gaga is working to assist shelters for homeless teens with strong outreach for LGBT youth who so often become homeless when they are thrown out and disowned by their "godly Christian" parents. Knowing individuals that experienced such examples of "Christian love" and seeing first hand the damage that it does, I applaud Lady Gaga's actions. Here are highlights from The Advocate:
*
Lady Gaga’s Monster Ball tour has sold out stadiums across the world, and diehard fans will seemingly do just about anything for a ticket. Which is likely how Lady Gaga tour sponsor Virgin Mobile came up with an idea to benefit a cause close to her heart. Gaga and Virgin have partnered with homeless youth shelters and programs with strong LGBT outreach to attract volunteers willing to give eight hours of their time in exchange for concert tickets.
*
Tuesday morning in Los Angeles, 14 volunteers — mostly teens and 20-somethings — picked up paint brushes and rollers to paint Hollywood’s Covenant House, an outreach program and homeless youth shelter dedicated to getting kids off the streets.
*
“I’d say about 10% of our youth are LGBT,” Covenant House California Associate Executive Director Sylvia LaMalfa told The Advocate. “It’s sad to say, but a disproportionately high number of youth are driven from their homes because they’re LGBT.”
*
The volunteers were all there for different reasons, the promise of Gaga tickets the icing on the cake, and several shared Gaga’s dedication to LGBT youth causes. . . . He says gay fans are so devoted to Lady Gaga because she’s that rare artist who speaks out for gay rights and really goes the distance. “A lot of artists won’t go full-force,” he said. “But she’s not afraid to throw it all out on the table — to demand action from the president even.”
*
“One in five of the homeless youth population in the U.S. are LGBT,” Virgin Mobile USA Cause Manager Felicia Hill told The Advocate. “And that was key to Lady Gaga picking these organizations — they have to feature LGBT friendly programs and focus on LGBT youth.”
Posted by Michael-in-Norfolk at Tuesday, July 27, 2010