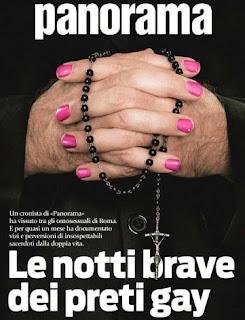 The Vatican's PR nightmare continues to run out of control - and deservedly so. The moral rot and bankruptcy throughout the Catholic Church hierarchy in respect to the sexual abuse scandal seems to encompass the majority of high clerics as opposed to being the exception to the rule. With this week's expose on the sexual partying and cavorting of priests in Rome, the Vatican is having vapors - or at least pretending to do so - and claiming such reports are untrue. The Guardian has more on the continuing fallout. My favorite is the statement that 98% of the priests in Rome are gay. Here are story highlights:
*
The Catholic church, already reeling from a string of clerical sex abuse scandals, is facing new embarrassment after an Italian magazine published an investigation into what it termed the double life of gay priests in Rome.
*
The diocese of Rome lashed out at the prime minister's magazine, saying its aim was "to create scandal [and] defame all priests". But it also urged gay clerics to leave both the closet and the priesthood.

It said, "Consistency would require that they come into the open", but that they "ought not to have become priests". The semi-official papal daily, L'Osservatore Romano, made no reference to the affair. Vatican Radio reported it briefly.
*
A member of the clergy quoted by the magazine put the proportion of gay priests in the Italian capital at "98%". The Rome diocese insisted the vast majority of priests in the city were "models of morality for all", while adding that the number of gay clergyman was "small, but not to be written off as isolated cases". A review eight years ago of research on the American church concluded that between a quarter and a half of seminarians and priests there were homosexual.
*
A former Italian MP and gay activist, Franco Grillini, said: "If all the gays in the Catholic church were to leave it at once – something we would very much like – they would cause it serious operational problems."
*
In March, the pope's own household was rocked by scandal when court documents revealed a Vatican chorister had procured male prostitutes for a papal gentleman-in-waiting.
Posted by Michael-in-Norfolk at Sunday, July 25, 2010