The Sad Truth About the Failed War in Afghanistan 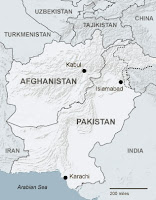 The leaking of secret documents released on the Internet by WikiLeaks is being condemned by some - including the White House - when in reality, I believe the leakers have done a service to USA voters and exposed this failed fool's errand in many ways for what it is. Other than a quick mission to capture the members of Al Qaeda linked to the 9-11 terror attack, the USA had no business trying to nation build in a country that has shown for thousands of years that it cannot be conquered. Sadly, that did not stop American hubris and the squandering of billions of dollars and countless lives when one adds in the civilian death toll. The other warped aspect of the leaks is that a suspected leaker will likely face years of imprisonment while nothing is done to punish those documented to have killed civilians and to have lied to U.S. politicians and the U.S. public. It's ass backwards in my view to say the least. Nowadays, "classified" when applied to military and political documents translates to information that needs to be hidden so that the public doesn't know the truth. Here are highlights from yesterday and today's New York Times, respectively:
*
A six-year archive of classified military documents made public on Sunday offers an unvarnished, ground-level picture of the war in Afghanistan that is in many respects more grim than the official portrayal.
*
The New York Times, the British newspaper The Guardian and the German magazine Der Spiegel were given access to the voluminous records several weeks ago on the condition that they not report on the material before Sunday.
*
The documents — some 92,000 reports spanning parts of two administrations from January 2004 through December 2009 — illustrate in mosaic detail why, after the United States has spent almost $300 billion on the war in Afghanistan, the Taliban are stronger than at any time since 2001.
*
As the new American commander in Afghanistan, Gen. David H. Petraeus, tries to reverse the lagging war effort, the documents sketch a war hamstrung by an Afghan government, police force and army of questionable loyalty and competence, and by a Pakistani military that appears at best uncooperative and at worst to work from the shadows as an unspoken ally of the very insurgent forces the American-led coalition is trying to defeat.
*
The reports — usually spare summaries but sometimes detailed narratives — shed light on some elements of the war that have been largely hidden from the public eye:
*
• The Taliban have used portable heat-seeking missiles against allied aircraft, a fact that has not been publicly disclosed by the military. This type of weapon helped the Afghan mujahedeen defeat the Soviet occupation in the 1980s.
*
• Secret commando units like Task Force 373 — a classified group of Army and Navy special operatives — work from a “capture/kill list” of about 70 top insurgent commanders. These missions, which have been stepped up under the Obama administration, claim notable successes, but have sometimes gone wrong, killing civilians and stoking Afghan resentment.
*
• The military employs more and more drone aircraft to survey the battlefield and strike targets in Afghanistan, although their performance is less impressive than officially portrayed. Some crash or collide, forcing American troops to undertake risky retrieval missions before the Taliban can claim the drone’s weaponry.
*
• The Central Intelligence Agency has expanded paramilitary operations inside Afghanistan. The units launch ambushes, order airstrikes and conduct night raids. From 2001 to 2008, the C.I.A. paid the budget of Afghanistan’s spy agency and ran it as a virtual subsidiary.
*
Over all, the documents do not contradict official accounts of the war. But in some cases the documents show that the American military made misleading public statements — attributing the downing of a helicopter to conventional weapons instead of heat-seeking missiles or giving Afghans credit for missions carried out by Special Operations commandos.
*
They [the leaked documents]suggest that the military’s internal assessments of the prospects for winning over the Afghan public, especially in the early days, were often optimistic, even naïve.
*
And in today's paper these are some of the highlights:
*
The disclosures, with their detailed account of a war faring even more poorly than two administrations had portrayed, landed at a crucial moment. Because of difficulties on the ground and mounting casualties in the war, the debate over the American presence in Afghanistan has begun earlier than expected. Inside the administration, more officials are privately questioning the policy.
*
In Congress, House leaders were rushing to hold a vote on a critical war-financing bill as early as Tuesday, fearing that the disclosures could stoke Democratic opposition to the measure.
*
“We don’t know how to react,” one frustrated administration official said on Monday. “This obviously puts Congress and the public in a bad mood.”

*Mr. Obama is facing a tough choice: he must either figure out a way to convince Congress and the American people that his war strategy remains on track and is seeing fruit — a harder sell given that the war is lagging — or move more quickly to a far more limited American presence.
*
As the debate over the war begins anew, administration officials have been striking tones similar to the Bush administration’s to argue for continuing the current Afghanistan strategy, which calls for a significant troop buildup.
*
The White House appeared to be focusing some of its ire toward Julian Assange, the founder of WikiLeaks.org, the Web site that provided access to about 92,000 secret military reports spanning the period from January 2004 through December 2009.
*
White House officials e-mailed reporters select transcripts of an interview Mr. Assange conducted with Der Spiegel, underlining the quotations the White House apparently found most offensive. Among them was Mr. Assange’s assertion, “I enjoy crushing bastards.”
*
At a news conference in London on Monday, Mr. Assange defended the release of the documents. “I’d like to see this material taken seriously and investigated, and new policies, if not prosecutions, result from it,” he said.
*
The admission that the USA is on a fool's errand instigated by Chimperator Bush and Emperor Palpatine Cheney and a military brass always only too ready to rush headlong into war would be a good start. I also agree with Assange that prosecutions are needed. The whole Afghanistan debacle is like a slow re-run of Vietnam. Will the U.S. military never learn from its past fiascos?
Posted by Michael-in-Norfolk at Tuesday, July 27, 2010