The Death of the American Middle Class 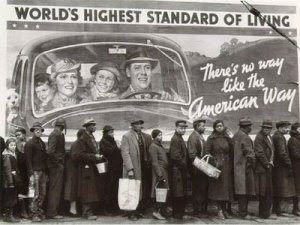 If you're happy with the Republican Party's approach to the economy and financial regulation, then I can only guess that you must think that the following data is just fine and dandy. For years Americans could expect their children to have a better lifestyle and more financial security than they themselves did. Sadly, not any more. And what's most shocking is that the cited statistics largely came about or the conditions giving rise to them arose on the watch of Chimperator Bush. Obviously, more of the GOP's management of the economy, financial regulation and a host of other things is NOT good news unless one is in the top 1% of the population. For the rest of us, things look grim and are worsening. What's insane is that the tea partiers - many of whom fall into those seeing their finances collapse - are in general backing the very political party that has helped lead them to ruin. Here are some very sobering highlights from Yahoo News:
*
The reality is that no matter how smart, how strong, how educated or how hard working American workers are, they just cannot compete with people who are desperate to put in 10 to 12 hour days at less than a dollar an hour on the other side of the world. After all, what corporation in their right mind is going to pay an American worker 10 times more (plus benefits) to do the same job? The world is fundamentally changing. Wealth and power are rapidly becoming concentrated at the top and the big global corporations are making massive amounts of money. Meanwhile, the American middle class is being systematically wiped out of existence as U.S. workers are slowly being merged into the new "global" labor pool.
*
• 83 percent of all U.S. stocks are in the hands of 1 percent of the people.
• 61 percent of Americans "always or usually" live paycheck to paycheck, which was up from 49 percent in 2008 and 43 percent in 2007.
• 66 percent of the income growth between 2001 and 2007 went to the top 1% of all Americans.
• 36 percent of Americans say that they don't contribute anything to retirement savings.
• A staggering 43 percent of Americans have less than $10,000 saved up for retirement.
• 24 percent of American workers say that they have postponed their planned retirement age in the past year.
• Over 1.4 million Americans filed for personal bankruptcy in 2009, which represented a 32 percent increase over 2008.
• Only the top 5 percent of U.S. households have earned enough additional income to match the rise in housing costs since 1975.
• For the first time in U.S. history, banks own a greater share of residential housing net worth in the United States than all individual Americans put together.
• In 1950, the ratio of the average executive's paycheck to the average worker's paycheck was about 30 to 1. Since the year 2000, that ratio has exploded to between 300 to 500 to one.
• As of 2007, the bottom 80 percent of American households held about 7% of the liquid financial assets.
• The bottom 50 percent of income earners in the United States now collectively own less than 1 percent of the nation’s wealth.
• Average Wall Street bonuses for 2009 were up 17 percent when compared with 2008.
• In the United States, the average federal worker now earns 60% MORE than the average worker in the private sector.
• The top 1 percent of U.S. households own nearly twice as much of America's corporate wealth as they did just 15 years ago.
• In America today, the average time needed to find a job has risen to a record 35.2 weeks.
• More than 40 percent of Americans who actually are employed are now working in service jobs, which are often very low paying.
• For the first time in U.S. history, more than 40 million Americans are on food stamps, and the U.S. Department of Agriculture projects that number will go up to 43 million Americans in 2011.
• This is what American workers now must compete against: in China a garment worker makes approximately 86 cents an hour and in Cambodia a garment worker makes approximately 22 cents an hour.
• Approximately 21 percent of all children in the United States are living below the poverty line in 2010 - the highest rate in 20 years.
• Despite the financial crisis, the number of millionaires in the United States rose a whopping 16 percent to 7.8 million in 2009.
• The top 10 percent of Americans now earn around 50 percent of our national income.
*
What has developed is a situation where the people at the top are doing quite well, while most Americans are finding it increasingly difficult to make it. There are now about six unemployed Americans for every new job opening in the United States, and the number of "chronically unemployed" is absolutely soaring. There simply are not nearly enough jobs for everyone.Many of those who are able to get jobs are finding that they are making less money than they used to.
*
Again, if these statistics look good to you, vote for the GOP and its efforts to obstruct any meaningful changes in this country that might help address the financial melt down facing more and more Americans. To me, it looks like the USA is fast on the path of Ancient Rome where there eventually came to be little incentive on the part of most citizens to uphold the empire. Rome's fall had nothing to do with homosexuality and everything to do with too much squander treasure and lives on endless wars and the annihilation of the Roman middle class.
Posted by Michael-in-Norfolk at Monday, July 26, 2010