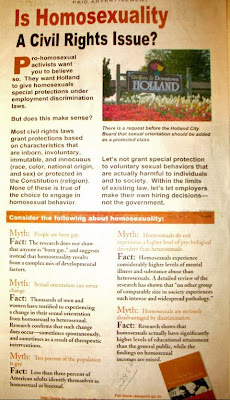 It has come to the point where just about anything the Family Research Council says about LGBT rights and individuals should be considered fraudulent until objectively proven otherwise. This supposedly Christian organization which has long used gay bashing as its cash cow for fundraising is out dissemination lies yet again. This time it is in the form of a fraudulent ad utilized to oppose anti-discrimination ordinance in Holland, Michigan, that would add protections for LGBT citizens. The ad can be seen here and above. Once again we here the lie that gays want "special rights" and witness a parade of known lies being yet again shamelessly retold Outfits like FRC increasingly make me view religion as an evil that the world would be better served to have extinct. Hate, lies, and discrimination are its principal fruits. The only myths about sexual orientation involved are the lies told by FRC. FRC's Klu Klux Klan loving president, Tony Perkins is pictured above. Here are highlights from Huffington Post on FRC's latest unvarnished campaign of lies and falsehoods:
*
A community group that is trying to make Holland more accepting of gay people planned to meet Wednesday, July 28, to decide how to respond to a full-page advertisement in the local daily newspaper that one of its leaders said included "blatant untruths" about gay people.
*
. . . The ad, which was sponsored by the Family Research Council and Request Foods and published July 23 in The Holland Sentinel, made reference to efforts toward broadening the city's anti-discrimination ordinance to include sexual orientation and gender identity. The Holland City Council has referred the measure to its Human Resources Commission for review.
*
The ad stated that "pro-homosexual activists" were trying to give Holland gays and lesbians "special protections" under employment discrimination laws and called homosexuality a choice that is "harmful to individuals and to society."
*
FRC doesn't provide references for any of their claims in the ad except one. On the far lower right corner of the ad is the image of a pamphlet that the ad invites people to consult. The pamphlet is called The Top Ten Myths About Homosexuality.
*
Ten Myths intentionally distorts information to make it seem that negative behaviors, i.e. drug and alcohol abuse, are indicative of the lgbt orientation. The pamphlet accomplishes this by citing data in regards to the lgbt community and such negative behaviors while omitting the fact that much of the data places the blame on homophobia for these negative behaviors.
*
It is apparent that in the fictional world inhabited by the Family Research Council, lgbts being able to live without fear of discrimination is a sin, but lying about the lgbt community is allowed.
Posted by Michael-in-Norfolk at Wednesday, July 28, 2010