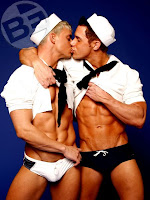 To listen to Senator Jim Webb and Elaine Donnelly, Tony Perkins and other professional Christians whose main purpose in life seems to denigrate and malign LGBT citizens, the repeal of DADT is supposedly a huge issue with straight service members. Indeed, it is claimed that they might flee in droves if gays are allowed to serve openly in the U.S. military. The funny thing is, however, that only 10% of recipients of the Pentagon's homophobic survey have even bothered to respond to the survey. For something that the demagogues describe as a big deal, that behavior would seem bizarre. Unless, in truth, most members of the military are indifferent to the proposal to end DADT. After all, most already know gay servicemembers and even 56% of Republicans favor repealing DADT. It all shows - in my view - that only (1) the parasites of the Christian Right shilling for money and (2) the spineless Congressional Democrats and the White House seem to be paying attention to the doom and gloom predictions of mass non-re enlistments and other slanderous lies being spread against gay servicemembers. Here are some highlights from Stars and Stripes:
*
Only about 10 percent of the 400,000 "don't ask, don't tell" surveys sent out three weeks ago have been returned, and Pentagon officials are lobbying troops to fill out the rest before the Aug. 15 deadline set for the research.
*
[G]ay rights groups have questioned the value of the survey, and the Servicemembers Legal Defense Network warned closeted gay troops against participating in the exercise. Even though the survey will be conducted by e-mail through an outside contractor, SLDN officials said that promise of anonymity didn’t offer enough security for troops who still could be kicked out under the “don’t ask, don’t tell” law.
*
Defense officials could not say whether that negative reaction has hurt response rates, but are urging everyone who received the survey to fill it out. A similar survey will be sent out to 150,000 military family members next month.
*
In May, both the House and a Senate panel voted for a delayed repeal of the controversial "don't ask, don't tell" law, allowing gay troops to serve openly after the president and Pentagon leaders certify a yearlong study into the effects on the force. The full Senate still has not passed the measure, but is expected to take up debate on the issue in September.
Posted by Michael-in-Norfolk at Thursday, July 29, 2010