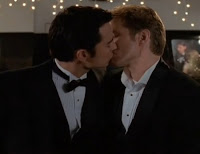 In a move that will send the Neanderthal elements of the Anglican Communion into full apoplexy, a committee of the Episcopal Church USA is working to develop a rite for same sex couples seeking Church blessing of their relationships. Frankly, I can already envision the spittle flying in Nigeria, Uganda and other nutcase corners of the Anglican Communion where all kinds of things are overlooked - e.g., polygamy, Archbishops who are suspected of ordering massacres, etc - and only gays get condemned on a daily basis. Hypocrisy is very much alive and well in this pockets of hatred with which break away elements of the Episcopal Church (and local GOP politicians like Scott Rigell) are aligning themselves. Here are some highlights from the New York Times:
*
Armed with a new $400,000 grant and the support of the Episcopal Church, a Berkeley seminary is convening priests from across the country to craft the liturgical rite for same-sex couples to receive religious blessings.
*
The new rite, which will take years to complete, will most likely consist of a series of original prayers, Bible readings and two essays: one on the theological meaning of same-sex blessings, and one advising priests who administer the new rite. If approved, the new blessing would be just the third addition to Episcopal liturgy since 1979.
*
“This is very significant,” said the Rev. Ruth Meyers, chairwoman of the church’s Standing Commission on Liturgy and Music, who is heading the effort. “It does acknowledge a fuller participation of gays and lesbians in the life of the church.”
*
Most of the grant money will finance travel and accommodations for a series of meetings to garner contributions from all 110 Episcopal dioceses, most in the United States. An official blessing would formalize what has long been an unofficial practice at some dioceses across the country. Unofficial blessings have taken place in Bay Area churches since at least the 1980s.
*
But not all Episcopalians support adding the blessing. “Doing this will cause great fracturing and great pain,” said the Rev. Canon Kendall Harmon of the Diocese of South Carolina. “It represents a willful American embrace of something that the Anglican Communion has said is out of bounds.”
*
“We’re taking this as an opportunity to offer these resources to the whole church,” Mr. Johnson said, “not just for the sake of gay and lesbian couples but as an opportunity for everybody to reflect theologically on what it means to be in a committed relationship.”
*
I firmly believe that history is on the side of the pro-gay leadership of the Episcopal Church and that in time folks like Canon Harmon will be looked back upon with the same disdain as racists and segregationists.
Posted by Michael-in-Norfolk at Friday, July 30, 2010