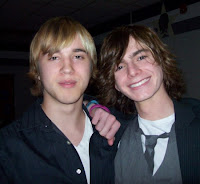 Another study is out which, like the UVA study on gay parenting, confirms what intuitively is merely common sense - gay teens who have affirming same sex relationships have increased self esteem and suffer from less internalized homophobia. The study also found that gay teens trying to have opposite sex relationships were not positively benefited by the process. The teen years are bad enough without the burden some of us suffered and/or continue to suffer being in the closet and feeling isolated and unable to be truly open and intimate with anyone. And struggling to pull off a relationship with someone of the opposite gender, at least for me, intensified the feelings of being a freak and increased the self-loathing inculcated into me by the Catholic Church growing up. The message of the study is that schools and society need to be more accepting of gay teen relationships. Here are highlights on the study from Health Canal:
*
ANN ARBOR, Mich.—Involvement in a same-sex relationship boosted self-esteem in teen males and lowered internalized homophobia in teen females who identified as gay, lesbian or bisexual, a new University of Michigan study shows. Surprisingly for the same teens, having an opposite-sex relationship had no affect on self-esteem, depression or anxiety.
*
Dating in adolescence is critical to developing sexual and social identities, says Jose Bauermeister, assistant professor at the University of Michigan School of Public Health. It's even more salient for gay, lesbian and bisexual youth because there is such a stigma attached to their sexual orientation.
*
Studies have shown that these teens may suffer more psychological distress, victimization, physical threats and violence than heterosexual youth. Gay, lesbian and bisexual teens who conceal their sexuality, often have a lower self-image or internalized sense of homophobia—which can lead to depression and anxiety.
*
The protective effects of same-sex relationships are different for young men and women, says Bauermeister, who oversees the SPH Sexuality and Health Lab. A same-sex relationship is protective in that it reduces internalized homophobia for girls even after only one relationship. For men, a same-sex relationship is protective in that it raises self-esteem, but the relationship must be prolonged. . . . Opposite-sex relationships did increase internalized homophobia in boys
*
"Providers and caregivers of (gay, lesbian and bisexual) youth need to create supportive environments where kids can talk about and support their sexual identity, which may include their dating experiences with same-sex and opposite-sex partners," Bauermeister said. The paper, "Relationship trajectories and psychological well-being among sexual minority youth," will appear in the journal Youth and Adolescence in August.
Posted by Michael-in-Norfolk at Thursday, July 29, 2010