Why "Religious Belief" Should Not be Afforded Special Rights 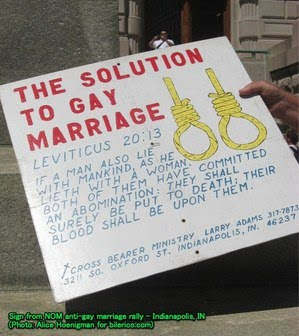 My post this morning about Jennifer Keeton, the self-created Christian martyr who wants special rights based on her religious beliefs, prompted a comment from a new Christo-fascist blogger who is apparently as self-centered as Keeton and who doesn't appreciate how ludicrous her argument is when standard Christian Right arguments about immutable characteristics are applied to religion. Granted, the Constitution in theory affords all citizens (other than gays, apparently in most of the USA) the right to freedom of religion. And given the European religious wars, the establishment of the Church of England in the thirteen colonies while under British rule, and other religious persecution horrors of their day, the Founding Fathers had good reason for writing freedom of religion into the Constitution. However, I suspect they never expected freedom of religion to be used as an excuse to ignore civil laws, flagrantly discriminate against other citizens, advocate physical violence and murder against other citizens (the photo above shows where Christianist "freedom of religion could lead), and seek to impose a theocracy on other citizens. Yet that is precisely what the Christian Right seek to do based on the right to freedom of religion - even though they deprive others of the very rights they themselves claim.
*
In seeking to further their theocratic agenda, the constant mantra of the Christian Right talking heads and charlatans who shill religion in exchange for money (and a plush living) is that gays want "special rights." The truth, of course is that we gays merely want EQUAL rights under the civil laws which need to avoid upholding one particular religious belief or doctrine above all others. No, truth be told, it is the self-centered, self-absorbed and self-congratulatory Christians who want special rights. They want the special right to inflict their supposed devoutly held beliefs on all other citizens, the special right to ignore non-discrimination laws, the right to ignore medical and mental health regulations and protocols, and the right to trample on the rights of those of differing faiths and beliefs.
*
The most disingenuous anti-gay argument that these Christo-fascists make is that only immutable characteristics are worthy of non-discrimination protections. Stated differently, only things like race, age, national origin, gender which an individual cannot change deserve non-discrimination protections. In their next breath, these godly Christians pronounce that sexual orientation is not immutable and, being merely a choice, is not something worthy of constitutional non-discrimination protections. The argument is, of course, a lie. All legitimate medical and mental health associations hold the position that sexual orientation is not a choice or changeable. But what is clearly easily changeable and not immutable? Why, religion, of course. Individuals across the nation (and world) change denominations and leave faith traditions literally daily. Barna studies have shown that the number of individuals doing this is huge. Religious belief is nothing more than a matter of indoctrination - may I say brainwashing - from an early age and/or a function of certain personality/psychological infirmities that require a "to do list" that voids the need for independent thought and moral analysis.
*
Thus, if one buys the Christofacists' immutability argument, religion should be the first category to lose protections. Personally, I'm not advocating anything that extreme. All I ask is that religious extremists be put in their place and that it be made clear that so-called religious belief does not give one carte blanche to pick and choose what civil laws and medical/mental health knowledge one will adhere to when out in professions and the civil arena. In short, there should be no special rights afforded to religion. Believe what you want in your home or house of worship, but do not inflict in on me so as to make me a second class citizen.
*
As for Jennifer Keeton and other self-described Christians who whine that they are being persecuted, they need to stop the lies and bullshit and face the fact that THEY are the ones demanding special rights and that THEY are the persecutors and not the ones being persecuted.
Posted by Michael-in-Norfolk at Tuesday, July 27, 2010