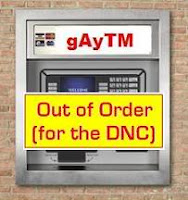 I am a constant critic of the Democratic Party which is long on talk and promises to the LGBT community but piss poor when it comes to actually delivering on anything of substance that applies to LGBT citizens across the country, particularly those of us living in states where a quasi-theocracy exists and Christianist anti-gay religious bigotry continues to be enshrined in the local and state laws. Kevin Naff of the Washington Blade has an on point column in that publication that echos my thoughts: when the Democratic Party comes calling for money, respond with a resounding "No." With respect to individual candidates who have put their votes where their mouth is, go ahead and support them since they - unlike the White House and the Congressional leadership - deserve support. And when the Party fundraisers call you, be sure to tell them why no money will be forthcoming. Perhaps - although I'm not holding my breath - if the money flow dwindles the message will get across that having a spine with less stiffness than Jello is a loser financially. Here are highlights from Kevin's column:
*
As Congress heads into its August recess and the November elections draw near, the Democrats are plunged into full panic mode, with some prognosticators convinced the Republicans will retake the House.
*
Playing defense is, of course, familiar turf for Democrats, who never seem comfortable in power. They live in perpetual fear of Fox News, Sarah Palin, Rush Limbaugh and a handful of other shrill blowhards, even though the far right has all but lost the culture wars, particularly when it comes to gay issues. Witness last week’s pathetic turnout for a rally against marriage equality in Maryland staged by the dinosaurs at National Organization for Marriage.
*
“Congress still hasn’t enacted significant protections for LGBT Americans,” Wolfe wrote. “Why? Fear, mostly. Fear that despite their distinct minority status, anti-LGBT extremists wield inordinate power when directly challenged. Swat that nest, the thinking goes, and the hornets will swarm. Incumbents, especially this year, aren’t eager to add perceived obstacles to reelection.”
*
This isn’t a new problem for the party. Many in the Democratic Party base were anxious for bold change after eight years of the Bush-Cheney debacle. And some have been mollified, following passage of financial regulation and health care reform. But the change around signature LGBT issues remains elusive, as Democrats have backed down from promises and cowered in fear of what Glenn Beck might say about them. The Employment Non-Discrimination Act is arguably the most important piece of that change.
*
Despite the justified LGBT disappointment and frustration with nervous Democrats, the party has no qualms about extending its trembling hand for another round of donations. Like a broken record, we’re already hearing how important it is to give money to the DNC.
*
That there exists no plan in the Senate to move on ENDA anytime soon confirms the worst suspicions about the party tossing breadcrumbs to keep gay donors on the financial hook for another election cycle. Gay money this year is better directed to individual incumbents and challengers who support our issues, not just in private, off-the-record meetings, but in public statements and votes.
*
Democratic politicians will never shake their nervous Nellie ways and stand up for LGBT constituents if they know gay donors will write checks election after election regardless of legislative advances.
Posted by Michael-in-Norfolk at Friday, July 30, 2010