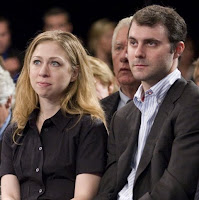 Never at a loss for words in their perverted quest to make the USA a Bible beating, Kool-Aid drinking theocracy, the bitches at Concerned Women for America have reached a new low - or at least another low, since they are in general such lying sleaze bags that they achieve many lows. Now, these godly, self-anointed bitches are attacking Chelsea Clinton for - oh the absolute horror - marrying a man of Jewish descent. Heaven forbid that people be judged based on their character or personal attributes. For the good bitches at CWFA, the only thing that matters is whether or not one is a far right Christian who hates gays, Jews, Muslims - indeed practically everyone else in the world. I know many individuals of the Jewish faith that on a daily basis act in a more Christ like manner towards others compared to the hate filled Christofascists at CWFA. (In my view, CWFA offers yet another reason not to call one's self a Christian nowadays). Here are some highlights from CWFA's screed authored by uber-bitch, Janice Crouse Shaw, taking Chelsea to task for marry someone Shaw obviously views as just a descendant of Christ killing Jews (NOTE: Shaw cites far right nutcase Al Mohler as one of her "experts"):
*
When asked about the significance of her daughter, Chelsea, marrying Marc Mezvinsky, who is Jewish, and thus being married in an interfaith union, Secretary of State Hillary Clinton responded, “Over the years, so many of the barriers that prevented people from getting married, crossing lines of faith or color or ethnicity have just disappeared.” True, the barriers have disappeared, but serious difficulties remain.
*
Observers have noted that both Clinton and Mezvinsky were raised in homes where religious faith was central to family life and questioned whether one or the other would convert and how they would reconcile the practice of their different faiths.
*
While intermarriage indicates a “high degree of assimilation and tolerance,” it also means “the declining role of faith and religious identity in the minds of many young Americans,” according to Allan Schwartz, in the “Emotional Challenges of Interfaith Marriage.” In her classic book, The Good Marriage: How and Why Love Lasts, Judith Wallerstein reports that couples set the stage for conflict, bitterness, and misunderstanding as they make the emotional and psychological separation from their families’ religious heritage. Problems begin as early as the planning of the wedding ceremony, where different traditions are in conflict, especially when certain symbols of faith “evoke powerful emotional responses.”
*
“When the level of doctrinal commitment is low, the barriers to interfaith marriage are correspondingly far less significant.” What this comes down to is that typically traditional “practices” and “activities” are simply adjusted and adapted — this is a gentle way of saying they get “watered down” to the point of irrelevance; central beliefs of committed adherents pose a larger, more difficult challenge, since they are far less amenable to compromise. As noted by Dr. Mohler, theological differences matter, and decisions that are made by a couple over the course of a lifetime — especially in raising children — affect the marriage.
*
For the true Christian believer, this means a life lived in light of Christ’s singular claim that He is “the way, the truth, and the life.” Taking His claim seriously, that He is the only way to the Father (John 14:6), means that all decisions are made in light of His teaching and commands. This includes His teaching that marriage is intended by God to be a life-long covenant — not just between the couple, but sealed by God and witnessed by fellow believers in the couples’ church community. That said, real Christian marriage includes a commitment to follow Christ, both in lifestyle and in childrearing.
*
Religion that is not practiced is little more than a set of myths and of no more significance than the fairy tales told to toddlers at bedtime. Faith that does not make demands on behavior is not faith at all. Inevitably, a lack of unity in faith entails multiple problems on both the little and the large issues that couples continuously encounter as they face the task of building a strong, meaningful, harmonious marriage. How could it possibly be otherwise?
*
Shaw does unwittingly get one thing right but ascribes it to Chelsea rather than to CWFA as is more appropriate - as practiced by the Christianists, their version of Christianity is a distorted set of fear and hate based myths that ought to be given no more significance than the fairy tales.
Posted by Michael-in-Norfolk at Saturday, July 31, 2010