I believe Love is For Everyone... Homosexual and Heterosexual: Nhojj Wins R&B/Soul Song of the Year 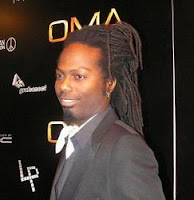 This blog has looked at homophobic singer/song writers, so it more than fair to laud singers who recognize the common humanity of all of us - gay or straight. One such singer is indie recording artist, Nhojj (pictured at left), who made OUTMusic Awards history when his ballad “Love” was voted 2009 Outstanding R&B/Soul Song of the Year by The Alliance of LGBT Recording Artists & Performers. Billboard Publicity Wire has more details. Here are some highlights:
*
This marks the first time an African American male has won an OMA. . . . Nhojj is also the first artist to win the OUTStanding R&B/Soul song of the year. OUTMusic added this and other categories to the ceremony this year to more fully reflect the music of the LGBT community. After his win, the singer/songwriter took the stage performing “Love” before an audience including OMA Lifetime Achievement recipient Kevin Aviance, Village Voice columnist Michael Musto, LOGO personalities DeMarco Majors and Julie Goldman among many other notables in the LGBT community. The ceremony was hosted by Noah’s Arc star Rodney Chester and GLAAD Media Award winner Kate Clinton.
*
“Love” features keyboardist Carl Evans (Stevie Wonder, Barry White); David Stark on Guitar (Rick James & Teena Marie); Tommy Aros on percussion (Luis Miguel); and is mastered by by Robert Honablue, whose Gold and Platinum credits include Santana, Roberta Flack, Aretha Franklin, Bob Marley, and Miles Davis.
*
Director Kirk Shannon-Butts featured "Love" in his highly acclaimed Indie film "Blueprint,” which screened at 2008 Cannes International Film Festival, and also directed the music video “Love.” Unlike many current R&B music videos, it is the sensitive reflection of two male college students who feel a mutual attraction toward each other. "I believe love is for everyone... homosexual and heterosexual" Nhojj says, "One day soon our world will acknowledge this simple truth."
*
In addition to his recording and performance schedule, Nhojj regularly donates his gift of music to people living with HIV/AIDS. He performs in hospitals, hospices, residential facilities and treatment centers throughout New York City , as part of the Lifebeat “Hearts and Voices” program.
Posted by Michael-in-Norfolk at Thursday, December 31, 2009