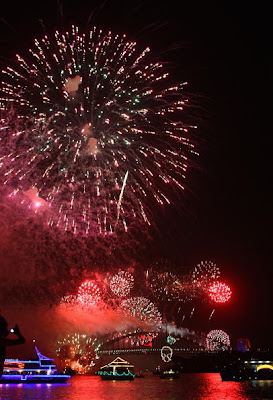 The boyfriend and I are going to a New Year's Eve party hosted by the "Ocean View Posse," a group of lesbians and their allies, who are using the net proceeds from the affair to benefit Operation Homefront which assists service members of the military overseas. Obviously, in this area with its huge number of military personnel, there are many such families. After that we may finish up at a party at neighbors down the street.
*
I will do a retrospective on 2009 tomorrow. However, until then, I want to wish my readers around the world a Happy New Year! I suspect most people do not understand the relationship that develops between a blog author/editor and their readers and other bloggers. It truly becomes a part of you and an emotional lifeline. I want to thank each and every one of you for visiting the blog and becoming such friends even though we have never met in person. Have a wonderful and safe holiday.
Michael
Posted by Michael-in-Norfolk at Thursday, December 31, 2009

Micheal, congrats on coming OUT. However I thought you were.