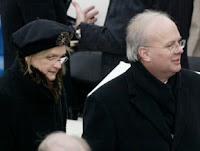 The hypocrisy of the "family values" Republicans literally seems to know no bounds. As Politico is reporting, Karl Rove, who time and time again used gay baiting anti-gay marriage ploys to turn out the Christo-fascists of the GOP base at election time has shown how much he honors the "sanctity of marriage" - he just got a divorce from his wife of 24 years. And, unlike me, he doesn't have a legitimate reasons - such as being gay - for his divorce. He apparently simply got tired of his wife. It's yet another example of Republicans wanting others to do as they say and not as they actually do themselves. I've always found Rove despicable and this news only enhances my sense of disgust. Here are highlights from Politico:
*
Karl Rove, former senior adviser to President George W. Bush, has been granted a divorce in Texas after 24 years of marriage, family spokeswoman Dana Perino said.
*
“Karl Rove and his wife, Darby, were granted a divorce last week," said Perino. "The couple came to the decision mutually and amicably, and they maintain a close relationship and a strong friendship. There will be no further comment, and the family requests that its privacy be respected.”
*
A family friend told POLITICO: “After 24 years of marriage, many of which were spent under incredible stress and strain during the White House years, the Roves came to a mutual decision that they would end the marriage. They did spend Christmas together with their son, and they plan to spend time together in the future. They maintain a strong friendship, and they both feel that that friendship is a source of comfort and inspiration for their friends and family.”
*
To me, it all sounds a bit bizarre. Is Karl not telling us something? Glenn Greenwald at Salon has some equally to the point comments on Rove's hypocrisy. Here are some highlights:
*
Karl Rove is an outspoken opponent of same-sex marriage, citing "5,000 years of understanding the institution of marriage" as his justification. He also famously engineered multiple referenda to incorporate a ban on same-sex marriage into various states' constitutions in 2004 in order to ensure that so-called ""Christian conservatives" and "value voters" who believe in "traditional marriage laws" would turn out and help re-elect George W. Bush. Yet, like so many of his like-minded pious comrades, Rove seems far better at preaching the virtues of "traditional marriage" to others and exploiting them for political gain than he does adhering to those principles in his own life.
*
[T]hose like Rove who have devoted endless efforts to barring gay citizens from marrying on the ground that our laws must enshrine Christian concepts of "traditional marriage" continuously take advantage of laws that enable them to end their own marriages on a whim, and even enter new marriages with their so-called "second, third and fourth wives," which only seems to intensify their "traditional marriage" preaching.
*
If Karl Rove, Newt Gingrich, Rush Limbaugh and their friends and followers actually were required by law to stay married to their wives -- the way that "traditional marriage" was generally supposed to work -- the movement to have our secular laws conform to "traditional marriage" principles would almost certainly die a quick, quiet and well-deserved death.
Posted by Michael-in-Norfolk at Wednesday, December 30, 2009