"Ex-Lesbian" Mom on the Run? 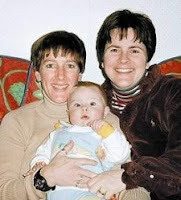 The Lisa Miller v. Janet Jenkins saga appears to be taking yet another twist and demonstrating the contempt of the wingnut crowd for the law and the courts. It's all about them and their attitude that they can give the courts the figurative equivalent of flipping the bird and believing that they can get away with it. Speculation is growing that "former lesbian" Lisa Miller may have run off with her daughter in contempt of a Vermont court order transferring custody to Ms. Jenkins. Throughout the legal battle between the former domestic partners in both the Vermont and Virginia courts, Miller has been represented by Christianist lawyers like Matt Staver of Liberty Counsel/Liberty University Law School. The case has been before the Virginia Court of Appeals and the Virginia Supreme Court several times and attempts to invoke Virginia's anti-gay marriage amendment have failed repeatedly. Now, there are fears that Lisa Miller has absconded with the child - some speculate with the help of Exodus International or other anti-gay Christianist organizations (I have seen several groups using Miller's "plight" for fundraising purposes). Here are some highlights from CBS News on Miller's disappearance:
*
The birth mother of a 7-year-old Virginia girl must transfer custody of the child to the woman's former lesbian partner, a Vermont judge ruled, adding that it seems the woman has "disappeared" with her daughter. Vermont Family Court Judge William Cohen ordered Lisa Miller of Winchester, Va., to turn over daughter Isabella to Janet Jenkins of Fair Haven at 1 p.m. Friday at the Virginia home of Jenkins' parents.
*
But in the Dec. 22 order denying Miller's request to delay the transfer of Isabella, Cohen wrote: "It appears that Ms. Miller has ceased contact with her attorneys and disappeared with the minor child."
*
Miller and Jenkins were joined in a Vermont civil union in 2000. Isabella was born to Miller through artificial insemination in 2002. The couple broke up in 2003, and Miller moved to Virginia, renounced homosexuality and became an evangelical Christian. Cohen awarded custody of the girl to Jenkins on Nov. 20 after finding Miller in contempt of court for denying Jenkins access to the girl.
*
The judge said the only way to ensure equal access to the child was to switch custody. He also said the benefits to the child of having access to both parents would be worth the difficulties of the change.
*
Mathew Staver, Miller's attorney, declined through a spokeswoman to comment on the case. A listing for Lisa Miller in Winchester, Va., says the phone line has been temporarily disconnected at the customer's request.
*
The supreme courts of Virginia and Vermont ruled in favor of Jenkins, saying the case was the same was a custody dispute between a heterosexual couple. The case was appealed to the U.S. Supreme Court, which declined to hear arguments on it.
Posted by Michael-in-Norfolk at Wednesday, December 30, 2009

Surely there are similar precedents to draw upon involving hetro couples. Namely, situations where the mother's male partner/husband is not the biological father, and has not adopted the child, but at some point had a supportive relationship to the child as a stepfather.

I can think of anecdotal cases involving people I've known (in which case the former stepfather has no rights), but I'm not a legal scholar so I'd appreciate any info on the matter. Anyone?