Count Me Out: Defection from the Roman Catholic Church - Update 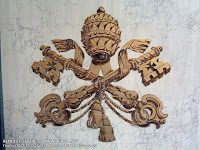 I did a post recently about a website named "Count Me Out" which focuses on Catholics seeking to leave the Roman Catholic Church in Ireland. I've received reader comments and e-mails on the post which caused me to do a little research and it turns out that the process described on the website tracks a policy called "ACTUS FORMALIS DEFECTIONIS AB ECCLESIA CATHOLICA" released by the Vatican in 2006. That pronouncement - which seems aimed at making it difficult to be deleted from the Catholic head count - can be found here. Merely, being a so-called lapsed Catholic does not take one off of the Church's membership rolls. Indeed, short of formal, legalistic action, one more or less remains a Catholic on the Church's books until death. One reader from Texas sent me details on his experience in formally getting removed from the Church membership rolls:
*
I did this last year and the Dallas Diocese made me jump through hoops to do it. I wrote to them asking for information on the process and was repeatedly told that I should come in for a chat about my decision to formerly leave the church, which I refused to do (I had no desire to be preached at or made to feel guilty for my decision). Finally, after I sent them a formal letter stating my intent to leave the church and why, they gave me the information that I needed. I still haven't heard back from the parish of my baptism regarding the letters I had to send them.
*
Basically it's a three step process, or so they told me. 1)You need to send them a letter manifesting your internal decision to leave and directed to a suitable church authority (for me it was a parish I had never, ever, attended); 2) Their formal acknowledgment of the letter; 3) Involves notifying the parish of your baptism (you need a copy of your baptismal certificate) and you should request in writing that the pastor make a notation into the baptismal register which indicates your "departure from the Catholic Church by a formal act." You will need to send a copy of their formal acknowledgment (step 2) to them [the parish] as well.
*
Out of curiosity - as well as a desire to make sure that I wasn't being used to falsely inflate Church membership figures, I sent off a letter today to the Bishop of the Diocese of Richmond. I will post an update on whatever response I receive from the Bishop and happily share any forms I receive with any readers that want them. Here's the body of my letter:
*
Dear Bishop Lorenzo:
*
I ceased attending the Roman Catholic Church in 2001. Since that time I have joined the Evangelical Lutheran Church in America. Because of (1) the gross failure of the Catholic Church to discipline the bishops, cardinals and –in my opinion Popes – who were involved in the enabling and cover up of sexual abuse against minors and (2) the Church’s activities in limiting the CIVIL law rights of same sex couples (e.g., Proposition 8, Question no.1 in Maine, etc.), I wish to formally severe any and all ties that would allow me to in any manner be considered a Roman Catholic.
*
I have in my possession a form that appears to be in the process of being utilized by a web site (http://www.countmeout.ie/how/) for those in Ireland who wish to declare their formal defection from the Catholic Church. I would appreciate it if you could provide me with the requisite form or forms for me to accomplish this goal. I have a number of others who are interested in pursuing this process and I will forward them the copies of the form/forms. If there is a website where the forms are available, please furnish me with the web address. A copy of my Baptismal Certificate is attached for your reference.
*
I know a large number of LGBT individuals who have walked away from the Catholic Church. It would be a shame to allow the Church to number us all as still Catholic in order to hide the fact that people are leaving because of the Church's corruption and anti-gay policies.
Posted by Michael-in-Norfolk at Wednesday, December 30, 2009

From the Catholic Church's perspective, there are two different things that you are compounding: a) who is Catholic; and b) who is counted as a Catholic. From the point of view of the Church, a Catholic is anyone who was baptized as a Catholic, or formally received into the Catholic Church, and who has not left it by a clear public act of repudiation. The forms you discuss relate to this issue. But who is counted is a different question. No one counts all those who are included in group (a). Civil counts are done by pollsters, who simply ask people what religion they are, or where they go to church. The Church numbers come from an actual count of who is registered in a Catholic parish. Now, this may include some persons who were once registered and who now consider themselves not to be Catholic. But usually such persons are dropped from the parish's rolls after a few years of not being heard from. This number - the number registered - is actually an under count, since Catholics are under no obligation to register themselves in a parish. There is another number that is often cited: the number actually attending Mass on Sundays. This usually is based on an actual head count of those who attend on several Sundays in October. This number is interesting, because it provides an actual measure of church attendance, and when compared to the number of Catholics who are registered, yields a percentage that is looked at closely (e.g. statements such as 'the number of Catholics who attend Mass has slipped from 40% to 30%).

Trying to get de-listed as a Catholic has about as much meaning as writing to Walmart and asking them to de-list you as a customer. First, they aren't likely to be keeping lists of people who pay in cash, and second, who cares?