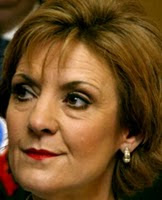 I did several prior posts on Anti-Gay Irish MP, Iris Robinson (pictured at left), who back in 2008 made crazy anti-gay statements - she called homosexuality disgusting, loathsome, nauseating, wicked and vile - and came out supporting reparative therapy for LGBT citizens. Now, Ms. Robinson is resigning from office due to her mental health issues - as if those of us in the LGBT blogosphere didn't already know that she had mental health issues. Here's what PinkNews reported her as saying in June 2008 (a statement she refused to retract):
*
"I have a very lovely psychiatrist who works with me in my offices and his Christian background is that he tries to help homosexuals trying to turn away from what they are engaged in. "And I have met people who have turned around to become heterosexual." Mrs Robinson turned down an invitation from gay rights group Rainbow Project to meet with gay and lesbian people and hear about their experiences and concerns.
*
Fast forward to December, 2009, and here is what a Dublin news site is reporting relative to Ms. Robinson's resignation:
*
DUP MP and MLA Iris Robinson, wife of Northern Ireland First Minister Peter Robinson, is to quit politics after admitting she has suffered serious bouts of depression.

'As many people will be aware, I have recently tried to return to the full-time work of representing my constituents following my latest period of illness. Over the years, I have undergone a long series of operations and though I have never talked about it publicly, I have, against this background, also battled against serious bouts of depression.
*
'Only those who have faced similar challenges in life will know the ordeal faced by those who are profoundly depressed and the distress caused to those around them as they grapple with personality changing illness.'
*
As one who personally deals with issues of depression, I am not totally unsympathetic to Ms. Robinson. However, nothing excises an elected official for making such vile statements about other citizens. Once in office, one is supposed to represent ALL of their constituents, not just who hold the same religious views.
Posted by Michael-in-Norfolk at Tuesday, December 29, 2009