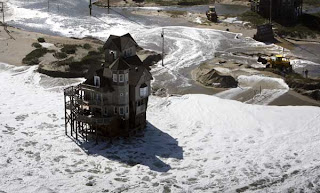 While the story has no huge relevance to anything of import, I thought I'd do a post on the sale of the house in Rodanthe, North Carolina, where I once stay - long before it became famous in a move starring the still handsome Richard Gere who grew up in the city where I was born. The house is the sole survivor of what was a small but very upscale subdivision on the north side of the town of Rodanthe in the Outer Banks. The other homes have all either succumbed to the relentless waves of the Atlantic or been moved to safer locations. Here are some brief highlights from the Virginian Pilot:
*
The beachfront house featured in the movie "Nights in Rodanthe" will soon have a new home itself, thanks to a bail bondsman who fell in love with the surf-threatened house after his wife bought the movie for him as a Christmas present last year. Ben Huss of Newton said Monday he hopes to close Jan. 4 on the house and have it moved and ready to rent by Easter weekend.
*
Huss plans to move the six-bedroom house less than a mile south along N.C. 12 to an oceanside lot that's still in Rodanthe. But it won't have the unobstructed view that it does now as the northernmost house in the village, with only National Park Service land to its north.
*
The house itself isn't in immediate danger. With pilings driven 14 feet in the sand and set in concrete, "Serendipity would never go anywhere," Creasy said. But the former 400 feet of beachfront had eroded to almost nothing over time, the victim of Hurricane Isabel and numerous nor'easters. Dare County declared the house a public nuisance for several reasons, including its notoriety that attracted visitors who would wade through water or even ride rafts to the front of the house at high tide to take their picture in front of it, . . .
*
When the house was built in 1988, it was a mansion that stood out among the smaller homes on Hatteras Island. Although much larger mansions have been built since then, the house is still special to Huss, who calls it a "junior castle." "It overtook me the way it was built," said Huss, who plans to restore the house to look the way it did in the movie, complete with the open deck and extended porches that were not part of the original construction.
*
Despite the fact that the islands of the Outer Banks are slowly but steadily moving towards the mainland, people continue to challenge the power of nature only to eventually lose the battle.
Posted by Michael-in-Norfolk at Monday, December 28, 2009