Is Iran Reaching the Tipping Point? 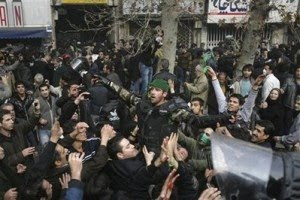 As a history major and avid reader on Middle Eastern history from the time of Alexander the Great and earlier, I have followed current events in Iran with great interest just as I did the 1979 overthrow of the Shah of Iran - a huge mistake, given the brutal regime that replaced his rule. The 1979 revolution also had a person connection since my uncle for whom I am named was heading up an engineering project in Iran when the Shah fell. Fortunately, he and other Americans with him were able to flee on foot across the border to escape capture by the Islamic revolutionaries. Things seem to be nearing a boiling point in Iran and now some are saying that the Islamic dictatorship is worse than the regime of the Shah. One of those saying this is Mehdi Karroubi - an influential Iranian reformist politician, democracy activist, mojtahed, and chairman of the National Trust Party. He was Chairman of the parliament from 1989 to 1992 and 2000 to 2004, and a presidential candidate in the 2005 and 2009 presidential elections. Via a YouTube clip, Karroubi stated today as follows:
*
It's now seven months since they so shamelessly violated the Constitution, principles of the Republic and Ayatollah Khomeini's repeated mantra of: "the people's vote is the last word" on the day of the election. During these months they responded to the peaceful protests of our nation by illegal mass arrests, show trials, horrific violence in custody and killings. [...] Sadly these illegal actions were repeated in the last 10 days.
*
Last night, they attacked the very spot Ayatollah Khomeini gave his speeches from for years when former President Khatami was giving a speech. And today from early in the morning, on the day of Ashura of all days, they acted with devastating violence, injuring many and killing a few of our fellow citizens.
*
Those who were at the forefront of the struggle against Shah's regime, vividly remember the days of Ashoura in 1963, when even the Shah respected the sanctity of the holy day and only arrested the leaders of the opposition in the following days.
How is it that a regime born out of Ashura protests [like that of 1963] is now sending bunches of thugs to the streets and shedding people's blood on the day of Ashura? ...
*
I can only cry out Imam Hossein's cry [killed in the day of Ashura in 7th century]: "Even if you don't have faith at least respect other's freedom!"
*
More on the continuing unrest, possible defection by at least some of the dictatorships and Karroubi's statement can be found here.
Posted by Michael-in-Norfolk at Sunday, December 27, 2009