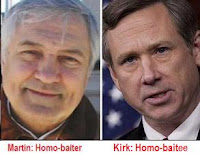 UPDATED: Fire Dog Lake also has a good piece on this story. Here are some highlights:
*
If the DADT policy is being applied fairly, Mark Kirk will now have to endure a discharge hearing, with all sorts of elements of his private life potentially being made public. I find that deplorable and sad. That’s why I no longer support the policy. Why does Kirk?
*
U.S. Rep. Mark Kirk, the front-runner in the Republican primary election for the U.S. Senate seat vacated by Barack Obama is suffering some less than pleasant karma. Kirk, who has voted as a homophobic Republican and supported Don't Ask, Don't Tell has been accused by his GOP primary opponent, Andy Martin, of being gay. Kirk's problem - besides the fact that the GOP base is now controlled by knuckle dragging homophobes who stampede based on rumor - is that Kirk is in the Navy Reserves. As such, he could be expelled from the military if members of the military believe the allegations about his sexual orientation. There would obviously be some sweet irony if Kirk were to be impaled by his own petard, if you will, in terms of DADT. The Chicago Sun Times has coverage on the homo-baiting Martin and the outwardly homophobic Kirk. Here are some highlights:
*
Andy Martin, once known as Anthony Martin-Trigona, who has run for numerous elective offices over the last three decades in Illinois, Florida and Connecticut, taped a commercial questioning whether Kirk is gay.
*
Martin’s source? Statements some conservative Republicans made on a radio show saying they have heard “rumors” that Kirk is gay. “Illinois Republican leader Jack Roeser says there is a ‘solid rumor that Kirk is a homosexual,’ ” Martin says in the ad. “Roeser suggests that Kirk is part of a Republican Party homosexual club. Lake County Illinois Republican leader Ray True says Kirk has surrounded himself with homosexuals. Mark Kirk should tell Republican voters the truth.”
*
Kirk, a U.S. Naval Intelligence officer, was unavailable for comment because he is on active duty over the holidays, said spokesman Eric Elk.
*
Martin has long argued in his e-mails that Kirk is gay and that it should be a campaign issue. But Martin has been ignored. What changed Monday morning is that Martin started running radio commercials on WBBM-AM and other major stations, who under federal communication and election laws, must run the ads unedited.
*
Kirk launched his candidacy with an endorsement from his ex-wife Kimberly, who he had just recently divorced. She stepped to the podium and said, “I support him 100 percent. He'll make a great senator.” Kirk, who speaks confidently on the floor of Congress and on the campaign trail about his deployments to Iraq and Afghanistan, faces five opponents in the Feb. 2 Republican primary.
*
Given that I have friends and clients expelled from the military under accusers they never knew or were allowed to confront, it seems most appropriate that Mr. Kirk get an opportunity to see what it feels like living in fear of possibly false allegations.
Posted by Michael-in-Norfolk at Tuesday, December 29, 2009