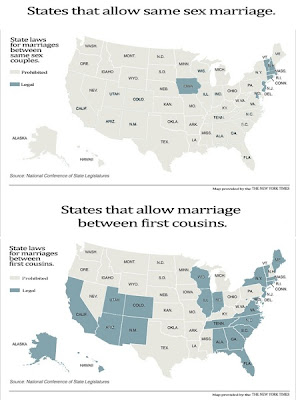 With all the Christianist blather about gay marriage leading to incestuous marriages, etc., Queerty has an interesting post that looks at the states that allow first cousins to marry as shown above. It would seem that Maggie Gallagher has bigger things to worry about than gay marriage. Virginia, which bans same sex marriages and domestic partnerships and discriminates against gays in general, would allow me to marry my first cousin as long as my cousin is not male. Pretty creepy in my view. Not surprisingly, seven of the states that allow first cousins to marry are in the Bible Belt.
Posted by Michael-in-Norfolk at Wednesday, December 30, 2009

Well I never thought this would happen, but in one way I need to disagree with you and very strongly in regards to first-cousin marriage.

It's far from incest.

My best friend Bill who passed three years ago and from Italian descent has a sister who married a first cousin.

On my great-grandparent's (paternal) side of the family here in the US a set of first cousins married.

So while I realize you're just using Queerty and its article to take a stab at Maggie The Cow, perhaps they and others who will repost or use the article as a reference point, should take a step back and realize marriage between first cousins in not new, evil, barbaric or any other word to descibe it, particularly a form of incest.

My point in doing this post was to show yet again the hypocrisy of our Christianist foes.

I am well aware that first cousin marriage was not unusual, especially in prior generations and European Royal Houses.