Why Did the Vatican Remain Quiet About Sex Abuse of Minors? 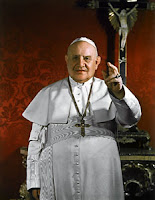 The fall out from the report on sexual abuse by Catholic clergy in Ireland continues to unfold and now the Belfast Telegraph is asking the critical question of why the Vatican remained silent and allowed sexual abuse continue to run rampant. I for one have long believed that the highest levels of the Roman Catholic Church hierarchy knew of the sexual abuse of children and youths by priests but preferred to cover it all up to protect the Church's reputation. Indeed, some past news story have suggested that as far back as the papacy of Pope John XXIII (pictured at right), the Vatican put out a directive that abuse stories were to be covered up and victims and their families made to remain quiet. Obviously, it these stories are accurate, the entire Church leadership is rotten to the core and morally bankrupt. Again, why does anyone listen to anything these nasty old men have to say on anything? Here are highlights from the Belfast Times story:
*
Victims campaigners have reacted with anger and disbelief after it emerged the Vatican and papal nuncio in Ireland ignored repeated requests from investigators for information on clerical sexual abuses cases.
*
Judge Yvonne Murphy, who carried out a devastating report into clerical sexual abuse within the Dublin Archdiocese, revealed her investigation received no co-operation from the Vatican or its Irish diplomatic representative despite a number of requests.
*
John McCourt, who suffered sexual, physical and emotional abuse at the hands of nuns at the Termon Bacca boys’ home in Londonderry for 10 years, said he was disgusted by the level of obstruction those in the higher echelon of the Catholic Church went to and supported calls for inquiries to be held into all the dioceses in Ireland. Mr McCourt said this revelation not only angered him but it also shocked him.
*
There have also been calls for inquiries to be held into dioceses throughout Ireland.
*
The sad truth is that many in the leadership of the Catholic Church around the world deserve to be behind bars - and unfortunately, that probably includes the current Pope, Benedict XVI. These men are depraved monsters. When I think of the pain and anguish - and yes, suicides - that the Catholic Chuch has caused it literally sickens me.
Posted by Michael-in-Norfolk at Friday, November 27, 2009