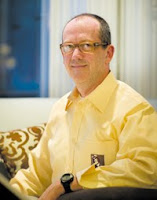 I have done a post or two before about my friend Jeff Ward (pictured at right) and the gay tour company he has started called Savvy Navigator .

Jeff and his husband, Michael Klein are great guys and their wedding reception back in 2005 in Washington, DC, was fabulous not the least because Michael produces What Not to Wear and While You Were Out for TLC and the casts from both shows were at the reception. Now, Passport Magazine has a tremendous profile on Jeff and his company. While I will not be able to afford one of his tours anytime soon, I am sure that it would be an experience of a lifetime. For more information on upcoming trips to South Africa, Argentina and Costa Rica, check things out here. Meanwhile, here are some highlights from the Passport Magazine story:
*
In the autumn of 2006, Jeffrey Ward began planning a party that would change his life. Well, change his life again. For several years, Ward, who today operates the niche gay travel company Savvy Navigator (www.savvynavigator.com), had been dealing with unexpected turbulence.
*
Ward eventually took a buyout from American and started his own small executive coaching business, Northward Leadership & Development. It seemed like a logical move, “I’d spent twelve years climbing the corporate ladder, but really loving my work every single day. I never understood people who hated going to work, who felt victimized by their careers or their jobs. I felt passionate about helping people close the gap between where they are and where they want to be.”
*
Which brings us back to that life-changing party. “Michael was going to turn 40 in April 2007, and we decided to have a big celebration with about 25 friends and family in Cape Town, South Africa. It’s a place we love. We’d been there together several times, including for our honeymoon after getting married at Toronto City Hall in 2004.
*
Ward ended his husband’s South African birthday extravaganza with a new beginning for himself. At a debrief following his meticulously planned group adventure, Ward began to brainstorm business opportunities with Southern Destinations, the company he’d used on the ground in Cape Town to help coordinate guides, lodges, and activity providers for his clan. “I realized that using my connections, I could put together Abercrombie & Kent-style itineraries for about half their price. I started mulling it over and thought this could be enormously appealing to a segment of the gay North American audience.”
*
Ward, whose well-heeled guests tend to range in age from 35 to 55, notes that just because one no longer wants to flop in hostels or schlep a backpack doesn’t mean limiting one’s self to the generic five-star chic of giant hotels that may feel no different whether you’re in Brazil or Bombay. “These are first class trips,” he notes (Savvy Navigator tours run from $4,000 to $6,000 per person), “but if you’re paying for me to arrange your vacation, I want to deliver an experience you probably couldn’t put together on your own. So many tour companies, gay and straight, use the same vendors and go to the same places. Savvy Navigator is not going to take you to a restaurant where you’ll turn around and see another group of tourists. I’m taking these trips with my groups, and they get the kind of inspiring, immersive vacation that Michael and I like to take ourselves.”
*
For independent-minded travelers a bit leery of traveling in a group, Ward stresses that Savvy Navigator tours are limited to twelve guests. “My typical guest is a gay man, generally north of 40, traveling with a couple of friends. It’s about 50/50 singles and couples, and we try to avoid charging single supplements whenever we can.”
*
Clearly, Ward has found a viable niche. One unexpected revenue stream for Savvy Traveler has resulted from word-of-mouth. “I was getting calls from people who heard about their friends’ experiences on my trips but whose vacation schedules didn’t allow them to travel when I had a tour going. So I started offering customized trips for couples, using a lot of the same locations. Because of my relationships with these great accommodations and guides who are genuinely gay-friendly, I’ve been able to arrange amazing gay honeymoon trips to South Africa. And there are even some hip straight people who’ve heard about us and asked me to make plans for them.”
Posted by Michael-in-Norfolk at Wednesday, November 25, 2009