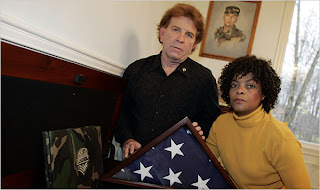 As one who lived through the Vietnam War era, I lost two friends - their family owned the summer home next to ours - who had served in the Army and came back home seriously disturbed emotionally by what they had experienced to the point that they took their own lives. A cousin also served as an Army Captain and volunteered as a nurse in Vietnam. While she never took her own life, her war experience changed her and she was never the again the happy free spirit she once had been. The two brothers who killed themselves were as much war casualties as if they had died on the battlefield. More recently, one of my clients feared for her husband who had done six tours in Iraq and Afghanistan with the Navy special forces. So far, he seems to have rebounded, but the horrors will never leave him. Yet even today, survivors of war related military suicides do not receive the standard condolences from the commander in chief. It is a sad commentary that these other war casualties are denied recognition since most would be alive but for their military service and the horrors they witnessed. The New York Times has a story today that looks at this issue. Here are some highlights:
*
Since at least the time of Abraham Lincoln, presidents have sent letters of condolence to the families of service members killed in action, whether the deaths came by hostile fire or in an accident. So after his son killed himself in Iraq in June, Gregg Keesling expected that his family would receive a letter from President Obama. What it got instead was a call from an Army official telling family members that they were not eligible because their son had committed suicide.
*
The roots of that policy, which has been passed from administration to administration via White House protocol officers, are murky and probably based in the view that suicide is not an honorable way to die, administration and military officials say. . . . But at a time when the Pentagon is trying to destigmatize mental health care in hopes of stemming a near epidemic of suicide among service members, the question of whether the survivors of military suicides deserve presidential recognition has taken on new significance.
*
“These families already feel such shame and so alienated from the military and the country, a letter from the president might give them some comfort, some sense that people recognize their sacrifice,” said Kim Ruocco, director for suicide support for Tragedy Assistance Program for Survivors, or TAPS, a military support group. “What better way to eliminate stigma?”
*
Through October, the Army, which far and away leads the armed forces in suicides, reported 133 among active-duty soldiers, putting it on pace to surpass last year’s record, 140. The Marine Corps, which has the second-largest number, is also likely to have more suicides than last year, 42. . . . the Army is trying to soften the longstanding sense that psychological problems are a sign of frailty. “We have to reduce the stigma surrounding seeking mental health help,” Gen. Peter W. Chiarelli, the Army vice chief of staff, said this year. “Getting help for emotional problems should be as natural as seeking help for a sprained ankle.”
*
After Gregg Keesling’s son, Chancellor, shot himself in a latrine on June 19, the family received a folded flag, a letter from the Army praising their son, a rifle salute at his burial and financial death benefits. But he views the letter of condolence as an important step toward reducing the shame and guilt many survivors feel. Hours before Chancellor, a 25-year-old specialist, killed himself, he had argued with his girlfriend over the phone and then sent a rambling, despondent e-mail message home.
*
“I can’t explain how ashamed i am i said some things out of anger,” he wrote. “I can’t cope without each and every one of you there by me the whole way. I feel alone and unappreciated for some odd reason this deployment is ending up to be like the last i thought about killing myself and went to the porti john and chambered a round into my m4 but decided not to pull the trigger. I realize i need help and i need to have family put first. Please forgive me and except my apology.” About 17 hours later, he was dead.
*
“My last words to my son were, ‘Be a man and get through it,’ ” Mr. Keesling said, recalling one of dozens of frantic phone calls to Iraq in the hours before Chancellor’s death. “I was the stupid dad. If my son had said, ‘Dad, I’ve broken my leg, I can’t go on,’ I would have understood. But I didn’t understand the mental health side.”
*
As one who has contemplated and attempted suicide, I believe that the stigma of seeking mental health care must be diminished. Not only within the LGBT community that suffers from so much discrimination and family rejection, but across the spectrums of society. No one should be pushed to the point where all they can think of is the need to make the pain/loneliness/alienation stop.
Posted by Michael-in-Norfolk at Thursday, November 26, 2009