A Further Review of the "Manhattan Declaration" 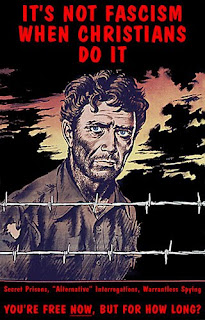 I wrote yesterday about the noxious "Manhattan Declaration" issued by a group of (i) professional Christians who have turned religion into a lucrative business, (ii) homophobes (and likely closet cases themselves) in the Catholic Church hierarchy and (iii) others motivated by a deep seated and near irrational hatred and loathing of LGBT people. That post brought me an anonymous comment that I and this blog "are an abomination" (although I do have to once again wonder why a gay hating Christianist was reading a gay blog -to view the male beauty photos perhaps?). Timothy Kincaid at Box Turtle Bulletin has a lengthy review of the Manhattan Declaration and those behind it that helps to highlight their overall agenda which is anything but Christian or respectful of constitutional government. He also notes the fact that Nigeria's arch gay-hater (and possible murderer of Muslims), Archbishop Peter Akinola was a signer of the declaration. I recommend a read of the full column, but here are some column highlights:
*
First, let us say what this document is not. It is not, as the NY Times described it, a situation in which “Christian Leaders Unite on Political Issues“. Indeed, this is but a segment of Christian thought, claiming the mantle of Christian history and tradition but excluding broad segments of the faith. One need only glance at the signatories to know the nature of the alliance. Present are some who are well known names in the political culture wars who have long striven to impose their religious views by force of law on the unbelievers: Dr. James Dobson, Chuck Colson, Gary Bauer, and Tony Perkins.
*
But this is not just broadly social conservatives. There is, instead, a concentration of those who focus on “opposing the homosexual agenda”. There are a few religious activists who seem dedicated and committed (obsessed, one might think) to fighting equality for gay people. . . Perhaps the most difficult to explain, and by far the most troubling name present, is The Most Rev. Peter J. Akinola, Primate, Anglican Church of Nigeria. . . . But his participation is not accidental. And, as I will discuss momentarily, his is perhaps the key that explains the true nature of this manifesto.
*
But as important as who is present, is who is absent. Among the signatories I was unable to find any members of the United Church of Christ, Episcopal Church, Presbyterian Church (USA), Friends (Quaker), Disciples of Christ, Unitarian Universalists or American Baptists. There was one United Methodist minister. In short, a whole branch of Christianity, Mainline Christianity, was missing, including many who no doubt would agree with the goals of banning abortion and forbidding same-sex marriage. This exclusion is, I believe, integral to understanding the true purpose of this manifesto.
*
[A]lthough the document speaks in lofty terms of Christian tradition and religious freedom, the only commitments it makes are to oppose legal abortion (some day down the road) and the immediate attack on the ability of gay people to avail themselves of civil equality. This is, in short a political alliance. It is a pact and a threat. . . . this is a war over religious domination, a fight over who is “really a Christian” and an effort on the part of a long-suffering religious subset to spite those who have long had what they coveted. Political power in the United States had long been in the hands of what is now called Mainline Christianity. . . there has never been a President of the United States that was both denominationally and ideologically within the fold represented by the signatories of this Manhattan Declaration. And now they want theirs. And, not content at the rise of their own political power, they will not be happy unless they can diminish those denominations whom they seek to replace.
*
[Akinola's] inclusion is a very clear message sent to the EC that they are a target for the Catholic Church and the evangelical churches who will use whatever political power they may wield in the future to thwart her position in the nation. This manifesto is, I believe, less a declaration of war on gay people and those with unplanned pregnancies than it is a declaration of war on other Christian faiths.
*
But absent the abortion issue, these allies have but one other shared issue: attacking you and your life. . . . Although virtually all of the spread of AIDS in Africa is related to heterosexuality, this will be an excuse to pass draconian laws seeking to repress, incarcerate, or execute gay men and women. In addition to being a slam against the Episcopal Church, the inclusion of Akinola announces that pogroms against gay Africans will have the endorsement of both the Catholic Church and conservative evangelical churches.
*
Liars lie. We expect the morally bankrupt to behave without integrity. But what I think we can anticipate, based on their conclusion, is a concerted effort at political stuntery. A dedication to dishonesty. And an ongoing campaign of lies. . . . It is possible that out of this declaration of war, the moderate and liberal branches of the faith may find common cause, if nothing else in defense of their own good name. Perhaps they will decide that they have a purpose and meaning in modern America and will let go of residual guilt and angst and take up the mantle of protector of the oppressed and champion of justice and mercy. Let us hope and pray that they do.

For far too long mainline Christian denominations have hesitated to denounce other supposed Christians even though these false Christians have perverted the Gospel message and increasingly made the term Christian synonymous with hate and intolerance. Like Kincaid, I sincerely hope these denominations will see the signatories of the Manhattan Declaration as the enemies of true Christianity and begin to speak out and challenge the message of hate being disseminated by the signatories of the declaration and their theocratic allies. If they do not do so, I believe all of society will suffer as the hate merchants usurp the mantel of Christianity.

Posted by Michael-in-Norfolk at Sunday, November 22, 2009