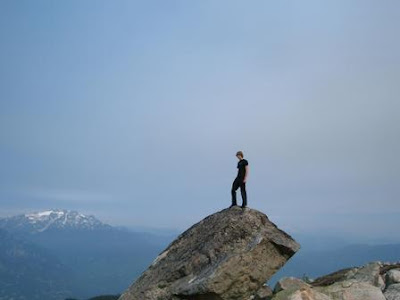 I know that I am not alone in this phenomenon, but the Thanksgiving through New Year's holiday season is all too typically depressing for me. Feelings of the need to exhibit forced cheerfulness and gaiety certainly do not help matters. I tend to think of lost opportunities, past mistakes, happier times past, lost relatives and worse of all my abandonment by my two older children. My son (pictured above in 2004 at Whistler, BC) has gone back to Washington State and I do not even know how to contact him. As for my oldest daughter, we have had no contact since late May. Thankfully, my youngest remains in contact and in fact is working for me part time so I get to see her almost every weekday. She truly doesn't know how much her faith in me has meant and helped me avoid the unthinkable to date.
*
I know full well that there was no way that I could have gone on living in the closet racked with self-hate and loathing. Plus, in retrospect, I was in a very dysfunctional marriage where my happiness was never allowed on the radar screen (I existed merely to make others happy, never myself)- all of which led me to be a very angry and unhappy person. Suicide would have been an absolute certainty if I had pursued the course of remaining in the closet. And yet, doing the right thing - indeed the necessary thing - and coming out has been anything but an easy journey. I know that am very blessed with a wonderful man in my life who treasurers me more than anyone in my life ever has before, but the sadness still often remains at times just beneath the surface. My therapist yesterday asked if I allowed myself to slide back into the old habit of putting on a pleasing facade for others in the pretense that all is well. Perhaps I do on occasion, but overall I can never return to that way of living.
*
This blog has been a life saving therapy for me. It allows me to vent feelings and most importantly vent anger and rage at a screwed up society where those who are different than the majority - in the case of gays, due to noncompliance with Christianist religious dogma - all too often suffer the consequences. It's ironic that those who claim to honor the sanctity of life go out of their way to make so many miserable. Are things changing for the better? I believe so, but surely not at the pace I would want. I want as few future generations to experience the crap that so many of us older gays knew growing up where the closet seemed the only viable option. We did nothing wrong and are merely as God made us, yet because of that, life has been far, far more difficult than it should have been.
*
I will survive another holiday season and this weekend will be busy with us joining the boyfriend's extended family on Thanksgiving - we had been scheduled to host, but the flood derailed that plan - and working away packing up everything remaining on the first floor before demolition and repairs get underway. We will also be installing a new floor in the styling area of the boyfriend's salon. Scatter throughout will be some evening social affairs with friends. Life goes on.
Posted by Michael-in-Norfolk at Tuesday, November 24, 2009

michael: you give voice, eloquently as always, to the feelings of many; certainly mine. If the calendar suddenly jumped from tomorrow, the day before thanksgiving, to jan. 2, 2010, you would not hear any complaint from me. now need to focus on something or some persons other than myself, this thurs. and in the weeks of dec. jon

Happy Thanksgiving to you, the BF, mom and all the readers of Micheal In Norfolk

Michael, Thanks for sharing that story. As I progress on my journey my worst fear is rejection by my kids (I have 4). I glad your daughter is standing by you. Hopefully, one day, she can facilitate a reconnection with the other 2.

Try to enjoy the time with those that are still close to you and have a happy holiday.