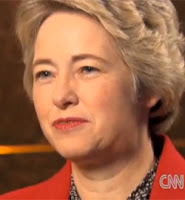 The anti-LGBT far right elements in the greater Houston area are liking calling the Houston Chronicle and threatening to cancel their subscriptions. Why? Because the Chronicle has endorsed openly gay Annise Parker in the run off election for mayor of Houston, Texas' largest city. To her far right critics - who have been running nasty anti-gay campaign ads against her - the only thing that matters is Parker's sexual orientation. Competence and ability mean nothing. Houston has long had a large and diverse LGBT population - the Montrose area was the hub of gay life when I lived in Houston decades ago - and in relative terms a fairly educated populace. All of which is the opposite of what the troglodytes of the far right want in a their Bible thumping backyards. Here are some highlights from the Chronicle's endorsement:
*
After scrutinizing the two excellent candidates vying in the mayoral runoff December 12, the Chronicle believes one is clearly better equipped by experience for the job. She is three-term Houston Controller Annise Parker.
*
With city tax revenues eroded by the continuing recession, the next occupant of the office must be a prudent fiscal manager as well as a leader who can make hard decisions on spending priorities. That will require a detailed knowledge of the city departments that deliver services to citizens in order to wisely prioritize cuts and stretch available revenues to the maximum. At the same time, the new mayor must also be a visionary focused not just on how things are in Houston but how they should be in the coming decades. Despite a hostile economy, the incoming administration will have to continue improving the quality of life in our increasingly urbanized metropolis.
*
In her dozen years in municipal office, she has established a record as an effective fiscal conservative. In her campaign she has opposed using taxpayer money to build a downtown soccer stadium and criticized the White administration for using tax revenue bonds to pay long-term employee pension fund obligations.
*
Parker has also been more specific than Locke in spelling out what she will do if elected mayor. While supporting light rail, she pledges to shake up the current Metro leadership to make the agency more transparent and accountable to residents. She also would replace Houston Police Chief Harold Hurtt with a more innovative chief (and one with closer ties to the city), and press for more cooperation between area law enforcement agencies.
*
In both her public and personal life, Parker has maintained high ethical standards and decorum in her years as an elected official. No scandals have occurred on her watch. As mayor she will present the city's best face to the world, one of tolerance, diversity and compassion for all our citizens. The Chronicle urges voters to allow Parker to take her high standards and solid record of accomplishment to the city's highest office.
Posted by Michael-in-Norfolk at Sunday, November 22, 2009