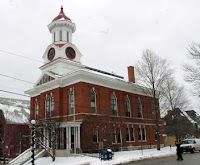 The long and bizarre saga of the Janet Jenkins-Lisa Miller custody battle took a new, ground breaking turn as a Vermont court awarded custody of 7 year old Isabella Miller to her non-biological but court-recognized parent, Janet Jenkins. Given Lisa Miller's refusal to abide by the rulings of both Vermont and Virginia courts, it's not surprising the she now has lost custody. Indeed, she ought to be in jail for contempt of court charges and her attorney, wingnut loon Mathew Staver of Liberty Counsel, should be facing sanctions given the number of frivolous actions and appeals he has filed for Miller. Miller and Staver are representative of the far right's belief that they are above the law and can denigrate and ignore court rulings they do not like. I do have to wonder how much Miller is getting paid by the fundies to continue to maintain her "former lesbian" charade. The Rutland Herald has more on the ruling and Miller and Stavers likely next stunt. Here are some highlights:
*
A Rutland Family Court judge ordered a first-of-its kind parent custody change Friday in a child-visitation dispute involving a Virginia woman and her former lesbian partner who lives in Fair Haven. In a 21-page order, Judge William Cohen granted sole custody of 7-year-old Isabella Miller to her nonbiological but court-recognized parent, Janet Jenkins. Jenkins and her former partner — and Isabella's biological mother — Lisa Miller, who renounced homosexuality after the couple split in 2003, have been in and out of courtrooms in Vermont and Virginia for years arguing over visitation rights.
*
After finding Miller in contempt of court earlier this year for denying Jenkins access to Isabella, Cohen said he decided the only way to ensure the child equal access to both parents was to switch custody. "The court concludes that it is in the best interest of (Isabella) that Ms. Jenkins exercise parental rights and responsibilities," the judge said. "This court stated that continued interference by Ms. Miller with the relationship between (Isabella) and Ms. Jenkins could lead to a change of circumstances and outweigh the disruption that would occur if a change of custody were ordered."
*
Miller's attorney, Mathew Staver, said Friday that Miller planned to fight for her daughter on two fronts: appealing Cohen's decision to the Vermont Supreme Court while continuing a battle in the Virginia Court of Appeals regarding the state's authority to enforce Vermont orders that conflict with Virginia's laws.
*
While the fight goes on, one legal observer said he believes Cohen's most recent decision will pave the way for future custody disputes involving same-sex couples. "It's a very important decision that I think will be influential beyond the borders of the states where these cases have been argued," Carl Tobias, University of Richmond professor of law, said Friday in a phone interview from Virginia. He said Cohen's decisions thus far had staying power because they treated the legal parents of civil unions — and by extension gay marriages — no differently than parents in heterosexual custody cases. While the Vermont case appears destined for appeal and the court battle in Virginia continues, Tobias said he didn't think appeals courts in either state would overturn the decision.
*
One can only imagine the self-inflicted martyrdom that Miller will now wear on her sleeve as Matt Staver and his fellow Bible beaters seeks to sucker more patsies into send his snake oil outfit more money.
Posted by Michael-in-Norfolk at Monday, November 23, 2009