Catholic League Has Vapors Over ChurchOuting.Org 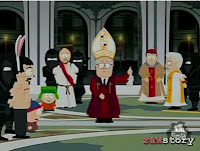 Perennial homophobe extraordinaire William Donohue at the Catholic League, who suffers from a bizarre persecution complex as well as homophobia, is in a tizzy over the new website ChurchOuting.org which seeks to out gay priests. It's ironic that Donohue is upset since he was one of the cheerleaders for blaming the Roman Catholic Church sex abuse scandal on gay priests and supported a witch hunt to force gays from the priesthood. Never mind that the Church's own study recently confirmed that sexual orientation had nothing to do with the rampant sexual abuse of minors by Catholic clergy. It seems Donohue only wants a witch hunt when the modern day version of the Inquisition is organizing the hunt. Or is Donohue afraid that the Church will collapse if all of the gay priests are indeed forced out? Here's a sampling of Donohue's screed:
*
A new homosexual website, ChurchOuting.org, is intent on publicly disclosing who the gay priests are in the Archdiocese of Washington. The goal of this outing is to intimidate gay priests, as well as heterosexual priests who may be “romantically involved,” into voicing objections to the Catholic Church’s opposition to gay marriage.
*
According to one news report, “Attey is going to approach priests he thinks are gay, and warn them that they better stop lobbying against gay people, seeing how gay they are…or…else?”
*
The Catholic League is prepared to assist any priest in the Archdiocese of Washington who is the victim of harassment, intimidation or stalking. Whatever resources the priest needs, we will see to it that he is served. If radical gay activists want a showdown with the Catholic League, we will not disappoint them.
*
Personally, I support the outing effort and given Donohue's often hysterical homophobia one has to wonder if perhaps he shouldn't be under surveillance. No one is that hysterical unless they secretly want gay sex themselves. but are religiously conflicted about it.
Posted by Michael-in-Norfolk at Monday, November 23, 2009