The Rational GOP vs. the Rogues 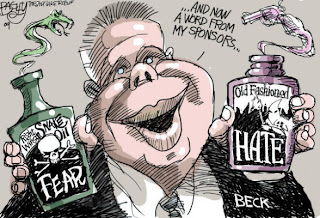 In the wake of victories in Virginia and New Jersey earlier in the month in the races for governor, some in the GOP see a possible formula for a come back in 2010. Their biggest obstacle, however, is to the Democrats but the lunatic "rogue" base of the party that seeks a constant culture war. These birthers, teabaggers and, yes, the signatories of the "Manhattan Declaration" will do all that they can to push for extremists candidates and a focus on their pet issues: abortion, stem cell research, gays and immigration. In short, subjects not relevant to the majority of voters and certainly not moderates and independents who are needed to win elections. Fear and hate are the staples of the persecution complex that drives the wuingnuts and they fail to grasp how unattractive it makes them and their preferred type of candidate appear, especially to increasing numbers of Hispanic voters and younger voters who eaach election cycle are replacing the dying off older generation. A column in the Reid Report looks at this civil war of sorts within the GOP. Personally, I hope the birther/teabagger faction wins out because it will mean the GOP will be unable to field winning candidates and that perhaps will lead eventually to the birthers and other batshit crazy elements in the GOP being forced back into the swamps where they belong. Here are some highlights:
*
The Republican Party has two, mutually exclusive, strategies for picking up seats (and governorships) in 2010. One the one hand, they have the Palin/teabagger strategy, which is being pushed by the media wing of the party — people like Rush Limbaugh, Glenn Beck, the winger netroots and Fox news. That strategy involves blowing up government itself, and even the Republican Party, in order to whip the jihadi base into an anti-Obama frenzy. You see it in the signs depicting healthcare as the Holocaust, the president as Adolf Hitler, and Michelle Bachman as sane.
*
On the other side, are the pragmatists: people who actually run Republican bureaucracies, and who see the model for victory in the newly elected New Jersey and Virginia governors. In short: run moderate, and avoid the jihadis at all costs. From Politico: The shorthand: run on economic policy, downplay divisive cultural issues, present an upbeat tone, target independent voters and focus on Democratic-controlled Washington—all without attacking President Barack Obama personally.
*
Such a strategy has made Virginia’s Bob McDonnell a certified star among the GOP establishment, but that dog just won’t hunt with the jihadi base, which wants Obama’s head on a platter, along with all-out war against his administration. The base of the GOP blames the safe route for the nomination of John McCain, and believes that had the McCain-Palin ticket been flipped, they would have won the election. (No, seriously, they believe that.) With Beck, Limbaugh, Fox and the RedState jihadis driving the public debate over the future of the GOP, the pragmatists’ strategy is having a hard time gaining ground, even after the Virginia and New Jersey wins. . .
*
Which side will win out in 2010, and 2012, is still up in the air. In Florida, the jihadi strategy is exemplified by Marco Rubio, who has taken the teabagger base and run with it. The pragmatic strategy is personified by Charlie Crist, although he has been giving serious nods to the nutters, just to stay viable. If Crist wins the Florida primary, it will be a victory for the RGA/Barbour wing. If Rubio wins (and that’s still a longshot, in my opinion,) it will release the jihadis to blow up the Republican Party.
*
And it doesn’t stop there. The jihadis are targeting big fish in 2010, including John McCain, who many in the qaida blame for the de-Reaganization of the GOP (since they really can’t bear to blame George W. Bush, and their heads would explode if they really examined Reagan’s record) and Olympia Snowe of Maine, who they’d like to see replaced by an un-electable wingnut.
*
How a once conservative, yet rational political party like the GOP has sunk to the level of the current insanity is baffling in some ways, but as a former GOP member and activist, from my perspective the lunacy directly tracks with the rise of the Christianists within the party. Those who first courted the Christian Right sold their souls and now are faced with a Frankenstein monster of their own creation.
Posted by Michael-in-Norfolk at Sunday, November 22, 2009

Not even “Fake News” Bill O’Reilly believes the crazies, how funny.

To all the birthers in La, La Land, it is on you to prove to all of us that your assertion is true (TOUGH WHEN YOU KEEP LOSING CASES), if there are people who were there and support your position then show us the video (everyone has a price), either put up or frankly shut-up. I heard Orly Taitz, is selling a tape (I think it’s called “Money, Lies and Video tape”). She is from Orange County, CA, now I know what the mean when they say “behind the Orange Curtain”, when they talk about Orange County, the captial of Conspiracy Theories. You know Obama has a passport, he travel abroad before he was a Senator, but I guess they were in on it.

In my opinion the Republican Party has been taken over the most extreme religious right (people who love to push their beliefs on others while trying to take away the rights of those they just hate) and that’s who they need to extract from their party if they real want to win. Good Luck, because as they said in WACO, “We Ain’t Coming Out”.

I can only hope that Taitz will resist the state collectors that will be coming to collect the $20K.