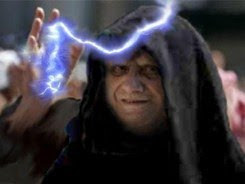 As is sadly the norm, members of the Roman Catholic hierarchy are much more interested in harrassing Catholics who fail to toe the line on the Church's mandated Midieval dogma than they are in cleaning their own festering house or atoning for the massive sexual abuse scandal. Hypocrisy, dishonesty and pompousness seem to be the leading prerequisites nowadays for appointment as a bishop or Cardinal under Pope Palpatine. A case in point is Rhode Island Bishop Thomas Tobin who has the time to harass Congressman Patrick Kennedy but not enough time - or concern it would seem - to deal with abuse victims. I continue to ask myself why anybody who has not had a lobotomy continues to listen to the morally bankrupt Church hierarchy. Here are some story highlights from the Washington Post:
*
PROVIDENCE, R.I. -- Clergy sex abuse victims and their supporters said Tuesday that Rhode Island's Roman Catholic bishop is not doing enough to protect children from pedophile priests even as he's taken on Democratic Rep. Patrick Kennedy for his stance on abortion rights.
*
A small group of protesters gathered outside Bishop Thomas Tobin's office in Providence two days after news broke that the bishop had asked Kennedy in 2007 not to take Holy Communion because he supports abortion rights.
*
"He claims that it's important that we protect the unborn. But it's equally as important to protect those who have been born and those young children who have been raped and sodomized by clerics and priests. But yet he seems to protect those clerics," said Ruth Moore, of Hull, Mass.
*
The group called on Tobin to publish the names of priests from the diocese who have been convicted of or admitted molesting children, or if a thorough investigation has turned up credible evidence of child molestation, even if no conviction resulted.
*
Such a list could help parents keep their children away from molesters and help employers screen potential hires, the protesters said. Skip Shea, from Uxbridge, Mass., who was abused by a priest as a child, told of seeing his abuser working next to the children's section in a bookstore as he awaited trial for abusing children.

Bill Nash of the Survivors Network of Those Abused by Priests called on Tobin to use his authority as a spiritual figurehead to protect children. "There are a lot of moral issues that he has to take leadership in, and the protection of children is a very important and critical area of moral leadership that he should be taking a more proactive stand with," Nash said.
Posted by Michael-in-Norfolk at Wednesday, November 25, 2009