When an American Idol Meets Homophobia 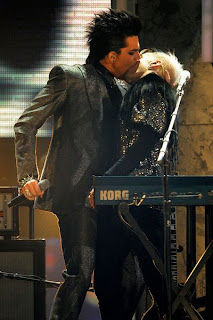 There has been a great deal of chatter in the blogosphere and on various news outlets about Adam Lambert's apparently impromptu kiss of a male keyboard player during the American Music Awards earlier this week (pictured at right). Sadly, I tend to agree with Lambert who believes that the reaction to the kiss is a case of a double standard: its fine two show two women kissing - e.g., Madonna and Britney Spears- but if the kiss involves two guys, the self-anointed and sanctimonious go berserk. Worse yet, a lame ABC News caves in and cancels Lambert's appearance on Good Morning America. Truth be told, the Christianists and those who are afraid of offending Christianist sensibilities want gays to simply disappear and become invisible. I'm sorry, but my attitude is that they can go f*ck themselves. We gays have been present since the earliest times in recorded history and we are NOT going away or going to hide any longer. From Classical Greece through Hellenistic times, same sex relationships were considered normal. Indeed, many of the writings of Classical Greek writers extol the virtues of same sex love and it was expected that young men have male lovers. Here are some highlights from a Newsweek story that looks at the controversy and the unequal treatment afforded gay males:
*
When Star Trek's Captain Kirk kissed the lovely Lieutenant Uhura onscreen in 1968, for what is thought to be the first black and white kiss on American TV, it was involuntary—telekinesis made them do it. Whoops! (Haven't we all been there?). It was the best way to get it past the network censors of course, because a white man kissing a black woman simply because he or she wanted to would have been far too provocative.
*
When former American Idol runner-up Adam Lambert kissed his male keyboard player on the American Music Awards on Sunday night, he too claims it was not premeditated but "in the moment."
*
This was an openly gay man kissing another man on television. ABC received 1,500 complaints and promptly canceled a performance that Lambert was due to give on Good Morning America Wednesday. He did not suffer due to ABC's timidity, as CBS snapped him up immediately.
*
ABC said it was too early in the morning for viewers to be exposed to "controversial" raunch like that. Now there are many things I don't like seeing early in the morning. Sweaty joggers, dirty nappies, trash cans emptied on the sidewalk, too-bright sunlight, and plastic, hole-punched footwear. Even, or perhaps especially, people who are cheerful and talk too much.
*
But two men locking lips? Even daytime soap operas have featured gay and lesbian kisses. Haven't we seen this all before? In 2003, Madonna kissed Britney Spears and Christina Aguilera—and these starlets were not just the same sex as Madonna but much younger as well.
*
So let's be clear: a girl kissing a boy is romance, a girl kissing a girl is titillation, and a boy kissing a boy is a controversial act of perversion? What do people think gay men actually do when they like each other? . . . [T]his whole episode is surely another illustration of the generational divide in attitudes to homosexuality. I doubt the people dialing the ABC complaints line on Sunday night were spring chickens. A 2009 CNN/Opinion Research Corp. poll found 58 percent of people aged 18–34 thought gay marriage should be legal, compared to 24 percent of those over 65. And young people were very cranky Tuesday: on Twitter, the hashtag "#ShameOnYouABC" started by blogger and gay activist Perez Hilton, was receiving roughly 3,000 comments per hour all afternoon. That's double the total number of phone calls ABC received—every hour.
*
The Los Angeles Times also looks at the controversy and the double standard applied to gays versus female singers/performers.
Posted by Michael-in-Norfolk at Wednesday, November 25, 2009