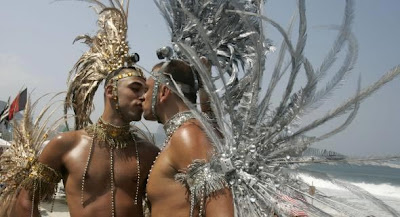 Brazil and some other South American countries continue to move ahead of the USA in their treatment of members of their LGBT communities. As PageOneQ reports (http://pageoneq.com/news/2007/Hundreds_of_thousands_fill_Rio_for_cel_1015.html) more than 800,000 people participated in Sunday's gay pride parade in Rio de Jainero along the famous Copacabana Beach. Story highlights include:
Politicians such as Rio de Janeiro Governor Sergio Cabral and tens of thousands tourists were among the revelers at the 12th annual parade. Despite the relatively cool temperatures many participants were scantily clad as they danced to samba music and waved the rainbow flag. The celebrations also took on a serious note, with a call to Brazil's congress for a bill against homophobia, same sex-marriage the right for sexual self-determination.
In June, more than 3.5 million crammed into the streets of Sao Paulo's business district for the world's largest gay pride parade. Sunday's celebrations in Rio were organized by Gays, Lesbians, Bisexuals and Transvestites (GLBT) as well as the Ministry of Health and the city Rio.
I may need to learn Portuguese yet!
Posted by Michael-in-Norfolk at Monday, October 15, 2007