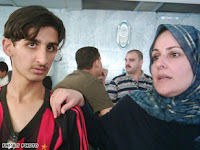 I know that some may think I am harping too much on the issue of Blackwater USA. However, the more information that comes out, the more distressing the facts appear. Personally, the impression I get is that Blackwater and its personnel feel they can kill Iraqis indiscriminately and who cares. They certainly do not. Their mindset is almost reminiscent of that of the Nazis towards Jews. They act as if they are subhuman and their deaths just do not matter. Yet these Iraqis are human beings and as in this case, appear to have been total innocents who were in the wrong place at the wrong time. What has America become when those apparently acting in the country's name appear to be lawless thugs? Here are some highlights from a new CNN story (http://www.cnn.com/2007/WORLD/meast/10/16/dad.blackwater/index.html)- two victims are pictured at left:
BAGHDAD, Iraq (CNN) -- Haythem could only recognize his oldest boy from his tall and slim physique as well as what was left of his shoes. His son's head had been blown away, his body charred beyond recognition. His wife of more than 20 years was torn apart.
"Only part of her neck and jaw remained," Haythem told CNN. The rest of her was covered by a body bag. Choking back tears, he said, "Killing them was not enough, blowing up their skulls, they burned them and disfigured them." Haythem's wife, Mahassen, and his 20-year-old son, Ahmed, were among the 17 Iraqi civilians killed and 27 others wounded in a hail of gunfire September 16 in Baghdad. Guards working for private security firm Blackwater USA are accused of opening fire on the Iraqis. The Iraqi government has said the Blackwater guards shot without provocation -- something the U.S.-based contractor has denied, saying the guards were in a firefight with gunmen.
An Iraqi government report has accused Blackwater of "premeditated murder," saying the company's guards randomly fired at civilians. An Iraqi panel investigating the shootings has asked Blackwater to pay the families of each of the victims $8 million in compensation. "Money will not compensate us for what we have lost, even if it were piles of it," Haythem said. "No one can put a price on the lives of those killed." Haythem, 46, a doctor who specializes in blood diseases, spoke from his temporary home in an upscale Baghdad neighborhood where he is living with his mother and two remaining children -- daughter Maryam, 18, and son Haidar, 17.
All Haythem and the family know about the final moments of their loved ones is what two Iraqi police officers who witnessed the shootings have told them -- that Ahmed was shot as he was driving his car in Nusoor Square and his mother clutched him tight as he was bleeding. "Those who witnessed the incident say that my son's head was scattered and my wife held him and hugged him," Haythem said. "She was screaming, 'My son, my son! Help me! Help me!' " The car slowly rolled forward until Blackwater guards unleashed more shots that turned the vehicle into a fireball, according to the witnesses. "They understood the call for help. They sprayed her with bullets," he said.
Haythem's wife also was a doctor and his son was attending medical school with hopes of becoming a surgeon. "They destroyed my family and they killed my beloved wife, my better half," Haythem said calmly. "They deprived me of my eldest son who I have raised into a strong, young man. They deprived him of fulfilling his dream to be a doctor and a surgeon. They planted pain and misery in the hearts of my two younger kids."
Am I ashamed to be an American because of such conduct? Most certainly. As the father of a son not too much older than Ahmed Haythem was, I can well understand his father's nightmare. Meanwhile, Blackwater head, Erik Prince makes his large donations to the GOP and, what are in my view, Christianist hate organizations that his wealthy father helped found. Something is dreadfully wrong with this picture.
Posted by Michael-in-Norfolk at Wednesday, October 17, 2007