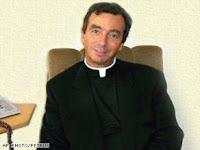 I seriously hope this guy doesn't meet with some "unfortunate accident." Given the way the Vatican sold out the lives and souls of thousands of children subjected to sexual abuse by priests, I don't think having this guy killed would cause the Vatican to blink an eye. This story is MOST interesting (http://newsinfo.inquirer.net/breakingnews/world/view_article.php?article_id=95567). Here are some highlights:

ROME -- A high profile Vatican cleric suspended after he was shown on television making advances to a young man allegedly had a list of homosexual priests and bishops in the Roman Catholic Church's governing body, Italy's Panorama weekly reported Friday. Father Tommaso Stenico, 60, had "a detailed dossier" of all the homosexual clerics at Vatican "with a list of names and circumstances implicating a certain number of priests and even bishops working at the Curia," Ignazio Ingrao, reporter for the conservative news weekly said.
Stenico also sent his superior Cardinal Claudio Hummes a report denouncing the moral degradation within the Curia, which could make the Vatican "tremble," Ingrao said. According to Panorama, Stenico, who also worked for a Catholic television station Telepace and owns a white BMW car, also drew up the list out of resentment at having waited so long to be named a bishop.
Let's hope that the "dossier" somehow makes its way into the hands of the media. Talk about having a field day and a gift from Heaven. I wonder if the dossier includes Benedict XVI and his handsome "personal secretary" with whom he is reportedly inseparable??
Posted by Michael-in-Norfolk at Saturday, October 20, 2007