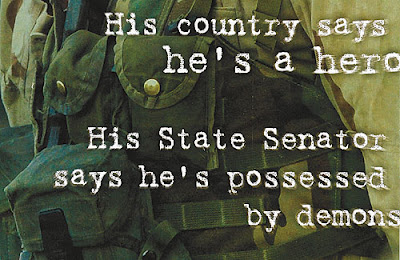 Virginia would be a wonderful state but for many of its residents. A case in point is local State Senator Nick Rerras - I do NOT live in his district - who pretty much could serve as the poster boy for the Christianist element within the GOP. For additional background, Rerras was the ONLY member of the Virginia General Assembly that opposed requiring clergy to be legally required to report suspected sexual abuse of children. Today's Virginian Pilot is running a story about Mr. Rerras' statements on mental illness that hopefully will convince residents to elect his Democrat challenger, Ralph Northam, a medical doctor. Here are some highlights:
The allegation that state Sen. Nick Rerras, R-Norfolk, has said repeatedly that mental illness is caused by demonic possession has again become a campaign issue. Four mailings to voters in the 6th State Senate District on behalf of Democratic challenger Ralph Northam treat the allegation as undisputed fact. One of the fliers says Rerras would prefer stoning the mentally ill to treating them with drugs.
According to mental health advocates, Rerras made the comments as long as eight years ago during meetings with mental health officials and at a Granby High School wrestling match. Northam said in September he spoke at a meeting of the National Alliance for the Mentally Ill in Norfolk. He said two people at the meeting said they had overheard Rerras blaming mental illness on demons. George Pratt, head of the Norfolk Community Services Board, later confirmed he had heard Rerras make that statement, Northam said. Two other mental health advocates, Honey Biberman and Martha Smith, said they told Northam they heard Rerras make such comments.
The allegation about Rerras emerged in the final days of the 2003 campaign. Rerras handily won re-election with 58 percent of the vote from the district, which includes the Eastern Shore, Mathews County, a portion of Virginia Beach and about half of Norfolk. This time, both Rerras and Northam say the race is much closer. It is attracting much statewide attention, as well as money.
Northam, a neurologist who treated many wounded veterans of Desert Storm while stationed with the Army in Germany, said he does, too. He said his experience with soldiers and with mentally ill children led him to raise the issue during the campaign. "We have a tremendous crisis in this state," Northam said. "Insurance companies are not recognizing mental illness as a health problem. We do not have enough facilities for these folks in the state. To have a leader who is making legislation to have that opinion of the mentally ill is not a way to move this issue forward."
Naturally, the Rerras campaign is denying the allegations. Having met Rerras several times in my former GOP phase of my life - before the Christianists had come to control the Party - I sadly suspect the allegations are true. Nick Rerras most definitely is a far right Christianist fanatic, in my opinion.
Posted by Michael-in-Norfolk at Sunday, October 14, 2007