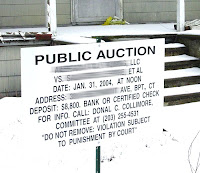 I am not sure where these folks have been for the last six months to a year. I have been discussing the housing crisis for some time. An article yesterday indicated sales of homes in Southern California were down almost 50% from a year ago. The ripple effect from that is huge in terms of lost business and related revenues. Combine that with the sub-prime mortgage melt down and it makes for one toxic economic stew. Locally, word has it that some smaller title insurance agencies have folded due to the business slow down. Here are some highlights from an MSNBC report (http://www.msnbc.msn.com/id/21322471/):

WASHINGTON - Treasury Secretary Henry Paulson called Tuesday for an aggressive response to deal with an unfolding housing crisis that he said presents a significant risk to the economy. In the administration’s most detailed reaction to the steepest housing slump in 16 years, Paulson said that government and the financial industry should provide immediate help for homeowners trying to refinance current mortgages before they reset at much higher rates. He also called for an overhaul of laws and regulations governing mortgage lending to halt abusive practices that contributed to the current crisis.

. . . the housing decline is still unfolding and I view it as the most significant current risk to our economy,” Paulson said in a speech delivered at Georgetown University’s law school. “The longer housing prices remain stagnant or fall, the greater the penalty to our future economic growth.” In his most somber assessment of the crisis to date, Paulson said that the housing correction is “not ending as quickly” as it had appeared it would and that “it now looks like it will continue to adversely impact our economy, our capital markets and many homeowners for some time yet.” Paulson spoke a day after officials from the nation’s three biggest banks announced the creation of a fund with up to $100 billion in resources to buy troubled assets such as mortgage-backed securities.

People I know in the mortgage industry are saying that we are only seeing the tip of the ice berg. Paulson should have spent a little time before now focusing on regulation. Much of the mess could have been avoided. Fasten your seat belts.
Posted by Michael-in-Norfolk at Thursday, October 18, 2007