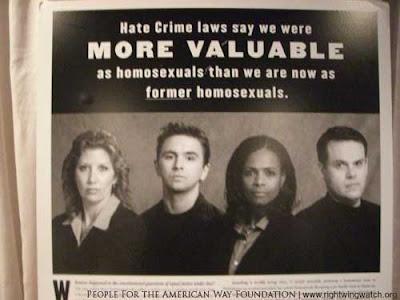 Exodus International and Focus on the Family are making prominent use of ex-gay propaganda at the so-called "Values Voter Summit" being held in Washington, D.C. A sample of the anti-gay PR is posted above. This event brings together the nation’s most powerful Religious Right political organizations, every major Republican presidential candidate, right-wing media stars like pundit Sean Hannity, and other right-wing legal and political strategists. Among the spokesman dictating the Christianist line to attendees was David Duke affiliate Tony Perkins of the Family Research Council.
People for the American Way will be providing updates via live blogging (http://www.rightwingwatch.org/). Needless to say the amount of anti-gay and anti-immigrant hate being spewed will be incredible. Yet more evidence of the Gospels being turned into messages of hatred.
Among the organizers’ supposed goals: flexing their political muscles and getting GOP candidates to pledge loyalty to the far-right’s agenda, energizing activists for 2008 efforts to turn churches into conservative voter turnout machines, and seeing if more consensus develops around one of the presidential contenders. Among candidates’ goals: making a good showing in the Family Research Council’s straw poll and tapping into some of the Republican Party’s most energized activists. Several reporters seemed skeptical that FRC’s straw poll will be immune to ballot-stuffing by candidates. Perkins defended the process but did say a couple of thousand people had become eligible by becoming FRC Action members in the past few weeks.
While I dislike these folks intensely, one must "know thy enemy" to work to stop their agenda.
Posted by Michael-in-Norfolk at Saturday, October 20, 2007