Who’s Got the Power? ABC’s “Boston Legal” Shills for Homosexuals in the Military 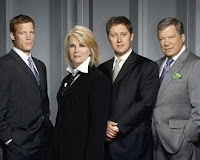 Having debated Peter LaBarbera (a/k/a Porno Pete in light of his fondness of attending gay leather events for "research") before via e-mail and caught him lying repeated when it comes to gays, it is no surprise that the closet case is foaming at the mouth over last night's episode of Boston Legal. The show focused on Don't Ask, Don't Tell and showed the unfairness of DADT. Secretly, I suspect Porn Pete is going crazy at the thought of hot gay boys in military uniforms. Here is some of LaBarbera's swill over last night's show from the website of his latest scam, I mean ministry:
The homosexual-bisexual-transsexual movement hypes its victimhood but it has incredible power and money as a small special interest group in society. At bottom, a well-heeled homosexual activist group, Servicemembers Legal Defense Network (SLDN), touts the “Boston Legal” episode, which probably could have been written by the SLDN itself, such is the propagandistic nature of pop culture today. If I were a gambler, I’d wager that the script advances the bogus “gay” activist analogy to ending racial discrimination and makes conservative opponents of homosexuals in the military out to be a “bigots” and irrational “homophobes.” Crazed military “homophobes” have been a favorite target of liberal Hollywood snobs for years — remember Chris Cooper’s character in “American Beauty” — who of course turned out to be a repressed homosexual himself?

The episode, which centered around the case of a gay General who was fighting - with the assistance of Candice Bergen - the military's "Don't Ask, Don't Tell" law, was a moving, passionate and brilliantly written look at the damage inflicted by this unconscionable law.
Posted by Michael-in-Norfolk at Wednesday, October 17, 2007

Email ThisBlogThis!Share to TwitterShare to FacebookShare to Pinterest
Labels: Boston Legal, DADT, gays in the military