A Deeper - and Frightening - Look at Blackwater USA 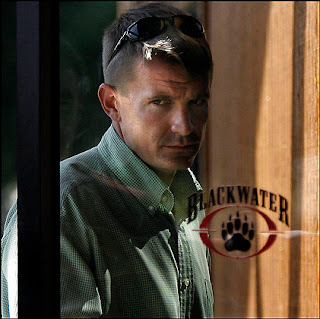 The Washington Post did a lengthy story on Blackwater USA and its affiliates over the weekend (http://www.washingtonpost.com/wp-dyn/content/article/2007/10/12/AR2007101202487.html). The more I read about Blackwater, its founder, and its operations, the scarier the picture becomes. Especially, since as the crow flies, Blackwater's Moyock, North Carolina facility ( a 7,000-acre facility known as Blackwater Lodge and Training Center) is perhaps only 25-30 miles away. Theoretically, the Chimperator's private mercenary army could launch a raid on Norfolk it's so close by. No doubt Erik Prince wouldn't mind rounding up all the local gays, given his Christianist ties and mentality. (BTW, I find Price's supposed Christian faith rather inconsistent with his company's operations which specialize, basically in killing people). Here are some story highlights:
" . . . Just days after testifying on Capitol Hill, Prince seemed like a king surveying his domain.:
Below him was a complex he calls Little Baghdad, a collection of drab structures used to prepare security forces for urban warfare in Iraq and elsewhere. In the distance, a half-dozen battered cars raced around a track in a high-speed motorcade, kicking up dust as they practiced tactics with a role-playing assailant in pursuit.

Blackwater has an airstrip and hangar filled with gleaming helicopters, a manufacturing plant for assembling armored cars, a pound filled with bomb-sniffing dogs and a lake with mock ships for training sailors. An armory is stacked to the ceiling with rifles. Throughout the place are outdoor ranges where military, intelligence and law enforcement authorities from around the country practice shooting handguns and assault rifles at automated metal targets made by the firm. An incessant pop, pop, pop fills the air.

There's no other place quite like Blackwater, at least not in private hands. The complex anchors a global training and security operation that is one of the government's fastest-growing contractors and both a fixture and a flashpoint of the wars in Iraq and Afghanistan.

Do you feel safer yet? I don't and as the Post story goes on, one cannot help but wonder how this country has allowed itself to get to a point where mercenaries play such a large role in military operations. It truly is like something out of ancient Rome. Worse yet is the continuing problem of Blackwater employees apparently believing that they are above the law-any law:

During a recent hearing, Rep. Elijah E. Cummings (D-Md.) questioned whether Blackwater has "created a shadow military of mercenary forces that are not accountable to the United States government or to anyone else." Prince seemed incredulous that anyone would suggest such a thing. "The idea we have a private army is ridiculous," he said, as a group of sheriff's department deputies cleaned their weapons nearby. "This idea of a private mercenary army is nonsense.
Blackwater Maritime has a 183-foot long ship for naval training. Two aviation-services businesses operate more than 50 planes and helicopters. Blackwater Manufacturing makes special armored cars the firm hopes to market to the military, as well as moving metal targets for training. Total Intelligence Solutions is led by former CIA officials, including Blackwater executive Cofer Black, who worked on counterterrorism at the CIA and State Department.
More than 100,000 people in the military and in local, state and federal law enforcement agencies, including those in Virginia and Maryland, have taken the center's courses. So have thousands of special operations personnel from the Navy, Army and other federal agencies. Before the Sept. 11, 2001, terrorist attacks, the training center hosted up to 50 people a day. Now the number of students on a given day is 500, sometimes higher. The company has more than 550 full-time employees and 1,400 contractors, who operate in nine countries, including Jordan, Azerbaijan and Burkina Faso. Contractors in Iraq earn the equivalent of $115,000 a year, a company official said.
Prince insists the security work that brings in so much of the company's revenue was supposed to be a secondary part of the business, behind the training operations. The company was called on by the government in a time of need, he said, and it answered that call. At odds with that assertion, though, were Black's boasts last year. At a conference in Amman, Jordan, Black touted the company's willingness to provide more aggressive peacekeeping forces around the globe. "We're low-cost and fast. The issue is, who's going to let us play on their team?" he said, according to a story in the Virginian-Pilot.
Posted by Michael-in-Norfolk at Monday, October 15, 2007