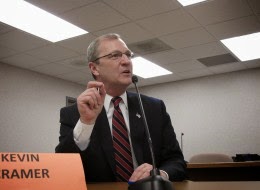 The batshitery - or is just plan unbridled bigotry - of some in the Republican Party sometimes defies belief.  A case in point is Rep. Kevin Cramer (R-N.D.) (pictured above) who has stated that he doesn't believe that LGBT individuals face work place discrimination even as the Christofascists in the GOP base repeatedly state that they want to retain the right to fire LGBT employees at will.  It's difficult to tell whether Cramer is simply a complete idiot (a distinct possibility in today's GOP) or simply a craven political whore to the hate merchants of the GOP base.  Either way, Cramer's head is so far up his ass it's a wonder he hasn't suffocated!  Here are highlights from the Huffington Post:

A Republican congressman said he's not sure that workplace discrimination against lesbian, gay, bisexual and transgender people exists -- because he's never gotten a phone call about it.

"I'm not even sure that this is a problem. I have to be honest, I don't get many, if any. I don't know that I've ever received a phone call in my office from somebody that says they've been discriminated against based on their sexual orientation," Rep. Kevin Cramer (R-N.D.) told Bismarck station KFYR on Tuesday.

Cramer is a first-term member of Congress who is facing a challenge from Democrat George Sinner. On Monday, the White House announced officials would draft an executive order that would bar federal contractors from discriminating on the basis of sexual orientation or gender identity.

Cramer added that he believes the White House's move was meant for political gain, and companies should be left to set their own policies.

Studies have found that workplace discrimination is a persistent problem for many LGBT individuals. Roughly one in five LGBT adults surveyed by the Pew Research Center in 2013 said that they had been unfairly treated by an employer.

According to the Human Rights Campaign, 21 states and the District of Columbia have passed laws prohibiting employment discrimination on the basis of sexual orientation, and 18 states and D.C. also bar discrimination based on gender identity.


Like many in the GOP, to Cramer, facts do not matter.  As one who lost my job for being gay, I know first hand that Cramer is full of s*it.

Cramer is probably actually correct about not receiving one call. I live in ND where most gay people still live in the closet for fear of the repercussions if they were to reveal their sexual orientation.