Reneging on a Right 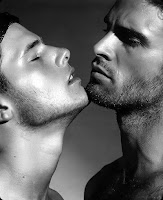 I am not sure how I missed it, but the other day the Los Angeles Times had a main editorial addressing the upcoming vote on Proposition 8 in November and urging readers to vote no. The column represents a good summary of why Proposition 8 needs to be defeated and also the dangers of mob majority rule which puts the rights of all minorities at risk. Today the targets of hate and discrimination are LGBT citizens. Who will it be tomorrow if Proposition 8 passes and sets the precedent that the majority can strip minorities based on whims and bigotry? That is NOT what the founding fathers intended. Here are some highlights from the column:
*
It's the same sentence as in 2000: "Only marriage between a man and a woman is valid or recognized in California." Yet the issue that will be put before voters Nov. 4 is radically different. This time, the wording would be used to rescind an existing constitutional right to marry. We fervently hope that voters, whatever their personal or religious convictions, will shudder at such a step and vote no on Proposition 8.
*
The state of same-sex marriage shifted in May, when the California Supreme Court overturned Proposition 22, the ban on gay marriage that voters approved eight years ago, and ruled that marriage was a fundamental right under the state Constitution. As such, it could not be denied to a protected group -- in this case, gay and lesbian couples.
*
What voters must consider about Proposition 8 is that, unlike Proposition 22, this is no longer about refining existing California law. In the wake of the court's ruling, the only way to deny marriage to gay and lesbian couples is by revising constitutional rights themselves. Proposition 8 seeks to embed wording in the Constitution that would eliminate the fundamental right to same-sex marriage. It's a rare and drastic step, invoking the constitutional-amendment process to strip people of rights. Yet in California, it can be done with a simple majority vote. All the more reason for voters to weigh carefully what would be wrought by this measure.
*
In a meeting with The Times' editorial board, supporters argued at length that children are best off when raised by their own biological, married mothers and fathers. Even if that were true -- and there is much room for dispute -- this measure in no way moves society closer to such a traditional picture. Gay and lesbian couples already are raising their own children and will continue to do so, as will single parents and adoptive and blended families. Using the supporters'own reasoning, it would be better for same-sex parents to marry.
*
In other words, the very act of denying gay and lesbian couples the right to marry -- traditionally the highest legal and societal recognition of a loving commitment -- by definition relegates them and their relationships to second-class status, separate and not all that equal.
*
Civil rights are commonly hard-won, and not the result of widespread consensus. Whites in the South vehemently rejected the 1954 Supreme Court decision to desegregate schools. For that matter, Californians have accused the state Supreme Court of obstructing the people's will on marriage before -- in 1948, when it struck down a ban on interracial marriages.Fundamental rights are exactly that. They should neither wait for popular acceptance, nor be revoked because it is lacking.
Posted by Michael-in-Norfolk at Monday, August 11, 2008