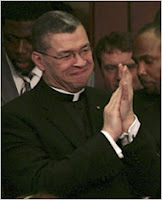 There is always the chance that false accusations of sexual abuse may be made against Catholic priests. However, the whole way the system is set up almost guarantees that some priests - who no doubt are very screwed up and tortured individuals perhaps in significant part due to the Roman Catholic Church's obsession with matters sexual and depiction of women as evil temptresses - will cross the line with students or altar boys. Then again, with over $2Billion paid out in settlements in the USA alone, there may be some looking to cash in on what they perceive to be something similar to winning the lottery. A third possibility is that since Harris has at times bucked the system, Cardinal Egan - who strikes me as a complete pompous bastard - or others in the Church could have engineered the abuse allegations (I truly put NOTHING past the hierarchy). Thus, I'm reserving judgment on Monsignor Harris for now until more facts are reported. Here are some highlights from the New York Times:
*
Tall and charismatic, Msgr. Wallace A. Harris has earned a reputation over a 36-year career for cool-handed crisis management and for forging connections. . . . At the height of the national uproar over sexual abuse in 2002, he testified before a blue-ribbon church panel studying the problem, saying that while some priests were guilty, many others were being falsely accused.
*
Now, Monsignor Harris himself is snared in allegations of abuse, and the shock has been felt not just among the members of his Harlem parish, but also among the members of the other flock he tended: fellow priests.
*
Last Sunday, the archdiocese announced that it had removed Monsignor Harris from all his priestly duties — as pastor of the Church of St. Charles Borromeo, as chairman of the priests’ council, and as vicar overseeing the half-dozen churches in central Harlem — after two men made sworn statements that he sexually abused them about 20 years ago, when he taught at a Manhattan high school for students planning to become priests.
*
The archdiocese has released few details about the accusations against Monsignor Harris, but people in the district attorney’s office familiar with the complaints said both were made by men who had been 13- or 14-year-old students at Cathedral Preparatory High School and College, now closed, where Monsignor Harris taught from 1983 to 1989, and where he had graduated before entering the seminary in the late 1960s.
*
Daniel Donohue, a student there in the 1980s who later accused Monsignor Kavanagh, the school rector, of sexually abusing him, said in an interview last week that he remembered Father Harris as one of the most popular teachers, but someone not to be crossed. . . . In the culture of the school at the time, Mr. Donohue said, “intense relationships between faculty and students were permitted to exist, both for priests and lay teachers.” He said for many priests — “guys who didn’t have anybody to go home to” — those relationships became all-consuming and, in his experience, abusive.
Posted by Michael-in-Norfolk at Sunday, August 10, 2008

I've never been convinced that the catholic church has any valid orthodoxy for denying priests the right to marry other than ringfencing the church's assets.

Celibacy, no matter how great a cleric's faith or vocation, is about as unnatural a state as a person not being allowed to breathe.

And so in recent years Rome has payed dearly for its obduracy, but the price yielded out of that institution's copious coffers has been a pittance compared to the horrible consequences endured by the victims of abuse layed on them by the pastors whom they and their families had trusted implicitly.

Stop this charade and let priests marry now as they do in most other faiths.