Gay Marriage and the Black Vote 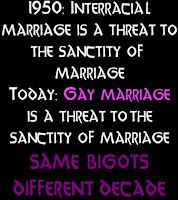 As I have said on numerous times, in this area of Virginia, besides the Kool-Aid drinkers who blindly follow Pat Robertson and other Christianist demagogues like lemmings, some of the most strident voices against gay rights are black ministers. I don't know if it's due to a total ignorance of history or just religious belief bordering on insanity, but many of these black ministers are cynically played and manipulated by white Christianist organizations who not that many years ago (and I believe still do) supported segregation, opposed interracial marriage and in general want to keep blacks inferior. These organizations who in the final analysis ONLY care about white evangelical Christians play the black ministers and their followers for fools. I an sure these black ministers and congregations do not realize that these false Christians like Robertson and Tony Perkins are laughing at them behind their backs. Thus, I find it interesting that an editorial in the Los Angeles Times questions whether this will hold true in the vote on Proposition 8. Here are some highlights:
*
At a Democratic presidential forum on gay issues last year, the Washington Post's Jonathan Capehart prefaced a question to Sen. Barack Obama this way: "Now, you and I both know that there's a homophobia problem in the black community." Capehart seemed to suggest that he was disclosing a shared secret, but the belief that African Americans are disproportionately hostile toward gays and lesbians is widespread.
*
That notion will be put to the test Nov. 4, when black voters in California -- expected to turn out in record numbers to support Obama -- also will face a proposition to put a ban on same-sex marriage in the state Constitution. The foregone conclusion, expressed by prominent gay journalist Andrew Sullivan and others, is that this means trouble for gay newlyweds.
*
Don't bet on it. Although ordinary polls report lower levels of support for same-sex marriage among blacks than among whites, views on same-sex marriage are a rapidly moving target that's tough to pin down, even for experts.
*
By invoking rights, the ballot's wording on Proposition 8 -- the title reads "Eliminates Right of Same-sex Couples to Marry" -- could turn off black voters. Proposition supporters sought a different heading, "Limit on Marriage," but a judge dismissed their case last week. . . . . Across the country, black voters repeatedly reelect African American politicians who support gay rights. The nation's two black governors have forcefully backed gay marriage -- and each has spoken movingly about accepting gay people in his own family.
*
Nonetheless, we can expect leaders of the religious right such as James Dobson and Tony Perkins to feature African American ministers prominently in their campaign to end gay and lesbian weddings in California. It's a cynical strategy. Too often the media have played along. In 2004, for instance, we heard far more about the subset of Martin Luther King Jr.'s family opposed to gay marriage than about how the late Coretta Scott King denounced the "Federal Marriage Amendment" proposed by President Bush that year as "a form of gay-bashing."
*
It is possible that California's African Americans this year, like those in Georgia four years ago, will vote for Proposition 8 in larger numbers than whites. But there is also reason to think that, as in six other states four years ago, the opposite might occur in the Golden State.Opposition to gay rights takes culturally specific forms, and Capehart was right, of course, that there is "a homophobia problem in the black community." But it's no worse than the homophobia problem in America that belongs to all of us.
Posted by Michael-in-Norfolk at Friday, August 15, 2008